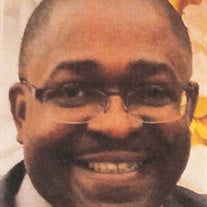 Albert “Dr. Bone” Junious, 57, went to be with the Lord on June 2, 2022. Al was born on September 2, 1964 in Saginaw, Michigan to AJ and Allean Junious, a middle child, with nine siblings. At a young age, he taught himself how to play piano. He later joined a band where he was known as “Dr Bone” for playing trombone. That band produced two recordings. Before graduating high school, he was introduced to the music department where he met his Godparents, Glenn and Demona Reed, who helped hone his skills alongside four Godbrothers. After high school, he served his country by joining the Marines and later traveled as a musician with a traveling evangelist. He was a licensed minister and used his gift of music to touch the lives of countless people across the nation and in the US Virgin Islands. He had his own studio and produced numerous albums, including one of his own. He was an entrepreneur and started a family-owned business of Carpet Care Extraordinaire. In October of 1988, Al married his soul mate, Sarah Hinton. To this marriage were born four children. Besides his love of music, playing numerous instruments, and spreading the word of God, he also loved basketball, but especially loved his grandbabies and spending time laughing with his family. He leaves to cherish his memory his wife, Sarah; sons, Joseph and James Junious (Diana); daughter, Dr. Victoria Junious; brothers, Milton Gray, Ezekiel Little Jr., Carl Little, and Leonard Junious; sisters, Gail Colbert, Dorothy Mae Corley, Mary “Polly” Woods, Sandra Kay Junious, and Regina Junious; his grandchildren, his goddaughter, Kenyada Harper, and a host of aunts, uncles, nephews, nieces, and cousins. He was preceded in death by his parents, and a son, Johnathan. A celebration of life will be held on Saturday, June 18, 2022 at East Saint Paul Baptist Church located at 5300 Oak Grove Road West in Fort Worth, Texas from 11 a.m. to 2 p.m. The celebration will continue in Saginaw, Michigan with a Memorial Service commencing at 11:00 a.m. on Friday, June 24, 2022 at New Christ Community Church, 3302 Grant Street, Saginaw, MI 48601. Dr. Eugene Seals will officiate. For more information phone: (989) 714-0543.

The family of Mr. Albert James Junious created this Life Tributes page to make it easy to share your memories.

Send flowers to the Junious family.