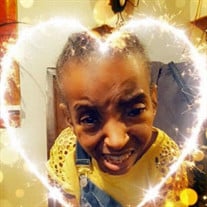 Angela Michelle Burns was born September 11, 1968 in Paw Paw, Michigan to Alan S. Burns and Annie Lee Burns Cross. She passed away on June 8, 2022 at the age of 53 years. Angela “Angie” resided in Bridgeport, MI with her loving mother and attended Millet Learning Center. She graduated in June 1995. Angela was very joyful, free spirited and she loved music. She enjoyed Al Green, Johnny Taylor, The Jackson 5, Bobby Blue Bland, Bobby Womack, Jeter Jones and many others. She loved so much that she held all the babies when they were born. Her playtime with us was a little song made up by her family when she was a child. Her sister, Marquitta continued doing this with her when she was not feeling well throughout the years. Angela’s nick names were, “”Angie” and “Ooh Wee”. Ooh Wee was her favorite word when she was happy or excited. She liked playing patty cake and peekaboo. What calmed Angie down was playing with her hands, pencils, pens, hairbrush, combs, keys, Barbie dolls or an empty paper towel roll being used as a telescope. She loved playing in water. She would walk to the kitchen or bathroom, and play in the running water leaving evidence everywhere and we always knew it was her. She loved laying by the fans to feel the wind blowing on her hands. When riding around, she would hold her hands out the window and she like pushing a vacuum sweeper back and forth. She loved animals. Although Angela was non-verbal, she understood everything that was said to her or when she heard people talk. If you knew her you knew her facial expressions. If you were popping off at the mouth she would laugh. She had a big smile. Her smile was bigger than she was. She leaves to cherish her memory, her mother, Annie C. Cross; five sisters, Nicole, and Marquitta Burns, Victoria and Kecia Cross and Markeish Burns-Cross; brothers, Micah Burns, Sr. and Marko Burns, Sr.; aunts, Rachel Wagner, Alice Goens, Marrilyn Yarbrrow and Donna Parker; uncles: Edward Russell Lee and William Wagner; nine nieces; 14 nephews; two great-nieces; a host of cousins, other relatives and friends including special friends, Bukewaeanna Harris, Brenda Taylor and Denise Wrisley, Shay Me'Chelle Mcgee other relatives and friends. Angie was preceded in death by her father, Alan Burns I; step-father, Limary Cross; grandparents, Myrtle Richmond and Freddie Lee I Mr. and Mrs. Sylvester Burns and Izetta Brown; great-grandparents, Minnie Burnett and Ed Richmond; uncles, Freddie Lee II and Tom Wayne; god-father, Larry Harris; nephews, Iziah Danks and Micah Burns, Jr.; niece, Natalia Burns. Family Hour will take place at 1100 A.M. Saturday, June 18, 2022, with the funeral service commencing at 12:00 P.M. at Evans & Browne's Funeral Home, 441 North Jefferson Avenue, Saginaw, Michigan 48607. Elder Katherine Dukes will officiate..

The family of Ms. Angela M. Burns created this Life Tributes page to make it easy to share your memories.

Send flowers to the Burns family.