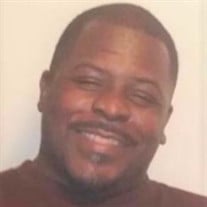 Mr. Anthony Earl Luke was born on September 14, 1975 to William Earl and Pauline (Washington) Luke in Saginaw, Michigan. Anthony was a member of Messiah Missionary Baptist Church under the leadership of his uncle, Pastor Otis Washington. He... View Obituary & Service Information

The family of Mr. Anthony Luke created this Life Tributes page to make it easy to share your memories.

Send flowers to the Luke family.