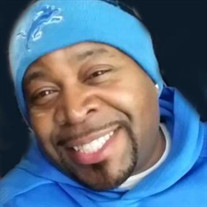 Anthony Washington was born January 26, 1968 in Saginaw, Michigan to Only Washington, Sr. and Marquerite (Ivory) Washington. He passed away Thursday, April 16, 2020 at the age of 52 years. Anthony graduated from Buena Vista High School “Class of 1986”. He joined the U.S. Army following graduation. After completion of basic training in Fort Sill, Oklahoma, he served one year in the Army Reserve prior to his union to Sharon Thomas in 1988. In September 1990 after becoming a full time Army Personnel, he was deployed to Saudi Arabia as part of Desert Storm. During his marriage to Sharon two children were born. He later relocated to Chicago, IL. After settling in he established a home, worked in the industry and made numerous friends. Anthony was known to his friends as “Tony the Tiger” and “Tony Bologna”. Tony loved people and spent most of his life laughing, cooking and spending time with family. He was an avid cook. He loved to bar-b-cue and grill! He was always happy and uplifting and would not let you be sad around him. Tony was a kid magnet. Kids loved to be around him and he loved spending time with them. Tony was also an avid sports fan. His teams of course were the “Detroit Lions” and the “Detroit Tigers”!!! In 2012 Anthony met Charita Smith while working at Temple Steel in Chicago, IL and they began dating in 2016. A wedding was set for September of 2019, but unfortunately it was cancelled. A new date was set for May 21, 2020 but he passed away before this could take place. Anthony leaves to cherish his memory, his children, Anthony “Tiger” Washington, Jr. and Keisha Leatrice Washington, both of Chicago, IL; grandchildren, Jeremiah Clifton Washington, Aniyah Ivey Washington and Alayah Rose Washington, Miah Leatrice Coleman, (twins) Brielle Toni and Noelle Alexis Robinson; his fiancé, Charita Smith; sisters, Emma (William) McDaniel, Shirley Calbert, Catherine Monroe, all of Saginaw, MI, Evelyn (James) Jones, Tampa, FL, Willie (Grantley) Payne, Metropolis, IL and Mary (George) Barrett, Cleveland, OH; brothers, Only Washington, Jr., Marvin and Michael Washington, Saginaw, MI, Milton Washington, Copperas Cove, TX; a host of nieces, nephews, cousins, special friends (too many to name) and other relatives. Anthony Washington was preceded in death by his parents, Marguerite Rose and Only Washington, Sr.; sisters, Sara, Virgil and Yvonne Washington; brothers, Robert, George and James Washington. Visitation will be from 2:00 until 6:00 p.m. on Friday, May 8, 2020 at the Evans & Browne's Funeral Home, 441 N. Jefferson Ave., Saginaw, MI 48607. A private funeral service be held.

The family of Mr. Anthony "Tony Bologna" Washington created this Life Tributes page to make it easy to share your memories.

Send flowers to the Washington family.