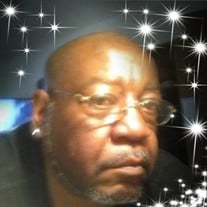 Our beloved brother, uncle and friend went to be with the Lord on Monday, April 28, 2021 at the age of 57 years. Benard Ervin Jackson was born, April 8, 1964 in Pineville, Louisiana the youngest son of the late Joseph and Vera Jackson. Benard... View Obituary & Service Information

The family of Mr. Benard Ervin Jackson created this Life Tributes page to make it easy to share your memories.

Our beloved brother, uncle and friend went to be with the Lord...