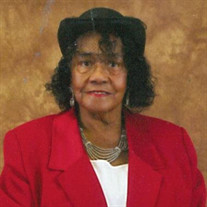 Bertha Garth lovingly known as “Minnie” by her siblings or Bratha” by her children and grandchildren, was born on September 19, 1931 in West Point, Mississippi to Charlie and Daisy Larry as one of thirteen children. Bertha forwent a formal education taking on responsibilities early to pick cotton and do other jobs to assist with the family income. As a teenager she met William Garth, fell in love and moved from West Point, MS to Saginaw, Michigan. William and Bertha entered into Holy Matrimony on December 5, 1953. From this union Bertha gave birth to four beautiful children. As a mother Bertha enjoyed shopping for her family, she enjoyed nice fancy things, especially if they were red or gold, and she loved to dress her two youngest as twins. Bertha loved music, but more specifically the “blues”, and was known to take her children every Friday to purchase a new blues record throughout their childhood. Bertha loved dancing and was known to “cut a rug” whenever her favorites were played. Bertha loved consignment shopping; shopping with her best friends, Carrie Harris and Lula Foster. Family oriented Bertha found joy in caring for her children and realized a love for caring for them in general. She found herself gaining a large extended family in the Sheridan Street neighborhood as her children constantly gravitated to her and formed lifelong relationships. Many went from being the caregiver to receipt from those she helped raise early on, like Chris and the Lopez family and the Holiday family. Bertha’s love for children launched a career of caregiving in childcare and as a cook at KinderCare. She loved her job so much and her work ethic was so strong that as long as there were kids to care for, she would keep doing it. So, finally at age 70 they locked out the childcare center to go enjoy life because they knew she’d otherwise work until her dying day. Bertha lived out the rest of her days busy working in her home and caring for her grandchildren and great-grandchildren because there was no way to slow her down. After 90 years fulfilling her earthly duties, in the early morning hours of December 26, 2021 Bertha went on to the realm of the ancestors. She leaves to cherish her memory one brother, Albert Larry (Francis); her children, William “Micky” Garth (Regina), Janice Garth, Brenda Blair (Dennis); grandchildren, Taneshea Smith, Willie “Boo” Smith, William “Woody” Garth, Shantoya Blair, Alicia Garth, Charmagne Garth,; great-grandchildren, Ari’onna, Kennedy, Tramaine, Zyaire, Da’Von, Aimirrha, Dareua, Mariah, Karmelah, O’Mari, Dior; great-great-grandchildren, Jay’ceon, Ahna, Amelia and Alayah, god-daughter, Lorreta Price; sisters-in-law and brothers-in-law, Frank (Sandra) Garth, Elena Garth, Clarence Johnson, Mr. & Mrs. Robert Sykes; special cousin, Helen Thomas; other relatives and friends, including special friends, Pauline Lawrence, Nelson Terry, Merry Reed, Ollie Blair, Learlean BeSant, Linda Veasley, Kathy Watkins, Hazel Turner and Alice and Joe Lopez. Bertha was preceded in death by her mother and father Daisy and Charlie Larry; her daughter, Josephine “Josie” Garth-Smith (Willie); her sister, Baby Mary Larry; brothers, George “Po Boy” Larry, Johnny and Rollie Larry (Mary); Annie Belle “Jake” Johnson, Mary Sue Rice (RC), Charlie Ann Dewalt and Susie Lee Larry; best friends, Carrie Harris and Lula Foster. Funeral service will take place at 11:00 a.m. Friday, January 7, 2022 at Truevine Missionary Baptist Church, 2930 Janes Street, Saginaw, Michigan 48601. Pastor Paul E. Broaddus will officiate with interment in Forest Lawn Cemetery, 3210 S. Washington, Saginaw, MI 48601. Friends may call at the Evans & Browne's Funeral Home, 441 N. Jefferson Ave., Saginaw, MI 48607 on Thursday from 2:00 until 6:00 p.m.

Bertha Garth lovingly known as &#8220;Minnie&#8221; by her siblings or Bratha&#8221; by her children and grandchildren, was born on September 19, 1931 in West Point, Mississippi to Charlie and Daisy Larry as one of thirteen children. Bertha... View Obituary & Service Information

The family of Mrs. Bertha Garth created this Life Tributes page to make it easy to share your memories.

Bertha Garth lovingly known as “Minnie” by her siblings or Bratha”...

Send flowers to the Garth family.