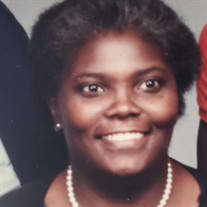 Ms. Betty Mae Staffney was born February 16, 1949 in Phenix City, Alabama to the proud parents of Ike Staffney and Georgia Lewis. She passed away on August 28, 2021 at the age of 72 years. Betty moved to Saginaw, Michigan from Columbus, Georgia in 1979. She was a member of Living Waters Church of God In Christ since 1986. She loved the Lord with all her heart and traveled with Missionary Jessie Greer all the time. She loved telling people about the Lord and was always trying to get them to attend church with her. She loved to cook and help people. She worked diligently in Home Health Care even after she was diagnosed with Multiple Sclerosis in 1995 before she became ill. Ms. Staffney leaves to cherish her memory, one son, Christopher B. Brown, Sr.; five grandchildren including a special granddaughter, Anta’Neesha Corral-Dilworth of Kansas City, Mo, and Christopher B. Brown, Jr., Ze’Von, Zemora and Zemara Brown all of Saginaw; two great-grandchildren, Raylynn and Christian Brown; one sister, Jennie Lewis; brothers, Jerry Lewis, James, Jerry, Isaac Staffney, including a special brother, James Staffney; a special cousin, Aundre M. Buckley; a host of nieces; a host of nephews, two of which she raised, Isaac and Jermaine Staffney; other cousins, many other relatives and friends including special friend, Mother Jessie R. Greer. She was preceded in death by her father, Ike Staffney; mother Georgia Lewis; sisters, Linda and Jackie Staffney; brother, Billie Lewis; step-mother, Earline Staffney and a step-brother, Willie Joe Davis. The family would like to express special thanks to Edgewood Assisted Living, Avista Nursing and Rehab staff, A & D HealthCare and Co. and Covenant Medical Center-Harrison and the ER staff. Memorial service will take place at 2:00 p.m., Wednesday, September 15, 2021 at Evans & Browne's Funeral Home, 441 North Jefferson Avenue, Saginaw, Michigan 48607. Pastor Tommy Greer will officiate.

Ms. Betty Mae Staffney was born February 16, 1949 in Phenix City, Alabama to the proud parents of Ike Staffney and Georgia Lewis. She passed away on August 28, 2021 at the age of 72 years. Betty moved to Saginaw, Michigan from Columbus, Georgia... View Obituary & Service Information

The family of Ms. Betty Mae Staffney created this Life Tributes page to make it easy to share your memories.

Send flowers to the Staffney family.