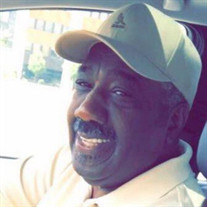 Bobby Eugene Shaw, age 77, was born in Memphis, Tennessee on April 13, 1944 to Charlie Shaw and Rosie Lee Newbern Shaw and left for Heaven on August 29, 2021 after passing at St. Mary’s Ascension Hospital in Saginaw, MI. The oldest of six children, Bobby was a gentle and kind man of faith. He was loved and respected by all who knew him. After graduating from Barret’s Chapel High School in Arlington, TN in 1962, he immediately moved to Saginaw, Michigan and began working for the General Motors Corporation, where he labored tirelessly for 42 years from 1963 to 2005 until his retirement. It was in Saginaw that he met and married the love of his life and soul mate, Ethel Beatrice Anderson, on January 21, 1974. Bobby leaves to cherish his memory his wife of 47 years, Ethel Beatrice Anderson Shaw; son, El Greco (Valerie) Shaw, Clarksville, TN; one grandson, Elgreco Garnett, Dallas, TX; two granddaughters, Tatyana Shaw, Memphis, TN, and Alexis Shaw, Sacramento, CA; one great-grandson, Jordan Garnett; three sisters: Betty (Willie) Fields, Arlington, TN , Alice Lee (Charles) Thompson, Saginaw, MI, Pearlie Mae Smith, Millington, TN; two brothers, Jerry Shaw, Shreveport, LA and Steve Shaw, Arlington, TN; and a host of adopted children, grandchildren, nieces, nephews, cousins, other relatives, and friends. Bobby was preceded in death by his father, Charlie Shaw; mother, Rosie Lee Newbern Shaw; brother, Gregory Shaw; sister, Dorothy Houston; two sons, Malcom Shaw and Bobby Shaw, Jr. Acts 11:24 For he was a good man, and full of the Holy Spirit and of faith. And considerable numbers were brought to the Lord. Bobby Eugene Shaw was a man who loved life and had a selfless desire to serve others. He enjoyed fishing, playing baseball and golf and was also quite the amateur photographer. His true passion, however, was serving His Lord and Savior Jesus Christ. From his acceptance of Christ at the early age until he received his wings at age 77, Bobby was a true servant of Christ and touched countless lives. His quiet demeanor and gentle spirit drew many to him and eventually to Christ. Always a no-nonsense kind of guy, he could always be depended upon to do exactly what he said he would do. An inspiration to young and old, Deacon Shaw was a true and mighty man of God. Family first! The most important thing to Bobby after his love of God was his family. He was a devoted son who took care of his parents until they went home to be with the Lord, a dutiful husband who worked hard to provide for and protect his family, a respectful father who showed his sons what it meant to be a Christian man, and a doting grandfather who spoiled his grandchildren while still teaching them the value of hard work and perseverance. Proverbs 20:7 A righteous man who walks in his integrity. How blessed are his sons after him. The funeral service will take place at 11:00 a.m., Wednesday, September 8, 2021, at Holy Communion Gospel Center 1245 East Genesee, Saginaw, Michigan 48607. Pastor Charlene Washington will officiate with interment in Forest Lawn Cemetery, 3210 South Washington Avenue, Saginaw, Michigan 48601. Visitation will take place from 9:00 a.m. until the time of service.

Bobby Eugene Shaw, age 77, was born in Memphis, Tennessee on April 13, 1944 to Charlie Shaw and Rosie Lee Newbern Shaw and left for Heaven on August 29, 2021 after passing at St. Mary&#8217;s Ascension Hospital in Saginaw, MI. The oldest of... View Obituary & Service Information

The family of Deacon Bobby Eugene Shaw created this Life Tributes page to make it easy to share your memories.

Bobby Eugene Shaw, age 77, was born in Memphis, Tennessee on...

Send flowers to the Shaw family.