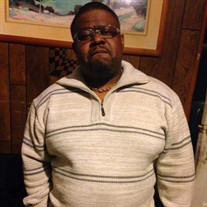 Bobby (Scoop) Eugene Steele the son of George Steele and Hattie Bell Steele was born on November 22, 1971 in Saginaw, Michigan. He made his transition from this life on November 30, 2020 at the age of 49 years. Bobby attended public schools... View Obituary & Service Information

The family of Mr. Bobby (Scoop) Steele created this Life Tributes page to make it easy to share your memories.

Send flowers to the Steele family.