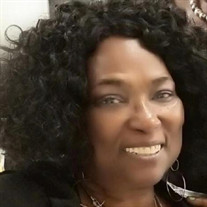 Ms. Brenda Kay Fuller, born July 15, 1954 in Jackson, Tennessee. She departed this life on Wednesday, October 13, 2021 after a brief illness at the age of 67 years. She attended Jackson Madison County Public Schools in Jackson, TN where she was a member of the Jackson Central Merry High School Class of 1973. Brenda accepted Jesus Christ at an early age at Home Baptist Church and Walnut Grove Baptist Church where she liked to sing in the choir and was inspired by hymns. She was a member of Gethsemane Missionary Baptist Church in Bay City, Michigan. Throughout her entire life, she was a devout Christian and enjoyed studying the Bible and participating in biblical discussions. Brenda graduated from Davenport University’s School of Nursing in 1994 and worked as a Licensed Practical Nurse at the Veterans Hospital and Bay City Regional Hospital until she became disabled. She spent most of her spare time cultivating her only son, Ashton and advocating for special needs children. Her love for children inspired her to often babysit for friends and she considered them her children. Brenda was a passionate person with a heart of gold. Once when she witnessed an accident, she stayed with the victim, held his hand and prayed over him. Sadly, the victim didn’t survive, but the family was grateful for her consolation during his last hours. She had a picturesque imagination and loved to design her own vivid clothes, tell humorous family stories and write inspirational poetry as gifts to others. She was quite fashionable stayed sharp from head to toe and loved her family to the fullest. She leaves to cherish her memory, a loving son, Mr. Ashton Fuller of Bay city, MI; her beloved mother, Dorothy (Freeman) Taylor of Humboldt TN; three sisters, Betty (Daniel) McBride of Harper Woods, MI, Lesa Fuller of Tampa, FL, and Teresa (Christopher) Norton of Palm Harbor, FL; three brothers, Larry (Ora) McBride of Saginaw, MI, Darryl Fuller of Jackson, TN, and Phillip Fuller of Tampa, FL; three special friends, Gwen Pearson Ragland, Cleo Farr and Rene King-Moore; a host of uncles, aunts, and several nieces, nephews, cousins, and friends that she shared special bonds with. Brenda was preceded in death by her father, William Quinn Fuller; sister, Gloria Fuller Goines; brother, Quinn Fuller; a very special niece, Katina McBride; grandparents, Roy and Hessie McBride. Visitation will take place Friday, October 22, 2021, from 1:00 p.m. until 5:00 p.m. at Evans & Browne's Funeral Home, 441 North Jefferson Avenue, Saginaw, Michigan 48607. Final arrangements entrusted to: Mercer Brothers Funeral Home, 501 Dr. Martin Luther King, Jr. Drive, Jackson, TN 38301, (731) 423-4922.

Ms. Brenda Kay Fuller, born July 15, 1954 in Jackson, Tennessee. She departed this life on Wednesday, October 13, 2021 after a brief illness at the age of 67 years. She attended Jackson Madison County Public Schools in Jackson, TN where she... View Obituary & Service Information

The family of Ms. Brenda Fuller created this Life Tributes page to make it easy to share your memories.

Send flowers to the Fuller family.