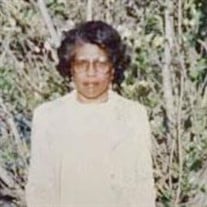 Mother Catherine (Honey) C. Oliver was born to the Late Lewis and Vesta H. Coleman on October 29, 1929, in Palmyra Island, Mississippi. She was the fourth child of thirteen. She accepted Christ at an early age. The Family later moved to Louisiana.... View Obituary & Service Information

The family of Mrs. Catherine Oliver created this Life Tributes page to make it easy to share your memories.

Send flowers to the Oliver family.