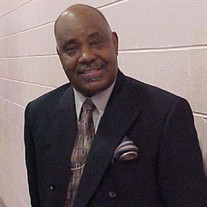 Charles Wesley Atwater, 83, departed this life on Tuesday, June 8, 2021 in West Bloomfield, Michigan. He was born July 5, 1937 to the late Jeffery and Leora (May) Atwater in Jackson, Tennessee. Charles moved with his family to Saginaw, MI where he attended school, earning his diploma from Saginaw High School. He spent the remainder of his life living in Flint, MI, where he lovingly raised 3 very grateful children, while serving a community of others. A devoted Christian, Charles served as Deacon at Christ the Liberator Presbyterian Church, Flint, MI for more than 30 years. Charles earned a Bachelor of Science of Education Degree (BSE) degree from Central State University and a Master of Education (M.Ed.) degree from Eastern Michigan University. These degrees best prepared him to follow his mission to serve children. He was most grateful that God put him in a position that allowed him to affect the lives of youth at risk, as he prepared them to be ready for the world and engaged in efforts that would lead to life-long learning and future success. He spent his entire professional career in service to children. Charles began his career in education at Pierson Elementary School in Flint and was later promoted to Assistant Principal at the same school. Charles served as educational leader at Parkland Elementary and Carpenter Road Elementary School, where he served as Principal, until he retired in 1999. The accomplished athlete and sports fanatic, Charles was always a willing participant. Whether he was a player in the game, coaching a team, or serving as referee, he loved sports; or off the field, he always played to win. An extremely proficient bowler, Charles rolled several three, 300 perfect score games, earning a gold, diamond, and ruby “300 Level Ring,” of which he was immensely proud. During the time he was a student attending Saginaw High School, local sports fans came out weekly to see this very talented, Trojan Warrior football superstar defeat the competition. Little did he know that the skills he had perfected in high school would lead him to fight in the same manner in his 1st postsecondary career position! Charles enlisted in the US Marine Corps, where he was assigned to the Special Services division. His athletic talent and “never-give-up" determination earned him the enviable military assignment of football star! His gridiron talents led him to be invited to join the Hawaiian All-Star Team, where he played in the Hula Bowl in Honolulu, HI. After he began his career as an educator, Charles spent his nights, weekends and summer breaks employed by the CANUSA Games Association and as a Flint Community School Director. These positions gave him even more opportunities to serve children and his community for more than 40 years. Charles will be lovingly remembered by those whom he loved dearly, one sister, Doris (John) Hinton, Saginaw, MI; 3 children; son, Rev. Frederick (Rhonda) King, Cedar Hill, TX, daughter, Patricia Meridy, Cincinnati, OH and son, Brian Atwater, Huntington Woods, MI; three grandchildren, Ryan, Erin, and Jennifer; six great-grandchildren, Donovan, McKenzie, Isaiah, Merissa, Brooklyn, and Reece; ex-spouse and great friend, Bette Atwater, with whom he continued to co-parent/grandparent/great-grandparent until his death. He also leaves a host of nieces, nephews, many, many other friends, and relatives. Charles was preceded in death by his parents, Jeff and Leora Atwater; two brothers, Willie B. Hutch and Joe Atwater; two sisters, Mattie (Atwater) Erwin and Mary (Atwater) Doster. His family would like to recognize and acknowledge with unending gratitude, Ted Watson, friend and surrogate son, who showed up early and often, whenever Charles was in need of assistance. Also, a very heartfelt thank you to niece, Bea and Stan, who opened their hearts and home to their Uncle Charles, both during the Flint water crisis and early-on in his illness, before he was hospitalized. We, his family, are profoundly grateful for the influence Deacon Charles Wesley Atwater had on our lives and the lives of so many others. He had a charismatic personality that he used to entertain and uplift or just simply to show love and acceptance to all whom surrounded him. A funeral service will take place at 11:00 A.M. on Saturday, June 19, 2021 at Evans & Browne's Funeral Home, 441 North Jefferson Avenue, Saginaw, Michigan 48607. Pastor Dennis Laffoon will officiate. Interment will take place in Great Lakes National Cemetery, G-4200 Belford Road, Holly, Michigan 48442. Friends may call at Evans & Browne's Funeral Home, 441 North Jefferson Avenue, Saginaw, Michigan 48607, from 2:00-6:00 p.m. on Friday.

Charles Wesley Atwater, 83, departed this life on Tuesday, June 8, 2021 in West Bloomfield, Michigan. He was born July 5, 1937 to the late Jeffery and Leora (May) Atwater in Jackson, Tennessee. Charles moved with his family to Saginaw, MI where... View Obituary & Service Information

The family of Mr. Charles Wesley Atwater created this Life Tributes page to make it easy to share your memories.

Send flowers to the Atwater family.