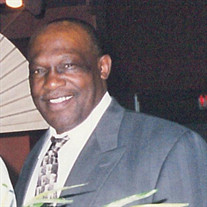 Charles was born to Willie Mae and Jaice Morris in Orville, Alabama on a joyful day on June 23, 1931. On Saturday, February 20, 2021 at the age of 89, Charles E. Morris transitioned to be in the presence of the Lord. After leaving Alabama, he enlisted in the U.S. Army after serving his country, he retired and became a U.S. Veteran. He began traveling to and from many states. He reunited with his brothers. He later reunited with his sister Jettie in Saginaw, Michigan, that’s where he found the love of his life, Essie Pearl. They were married for many years until death parted them. He was a member of Zion Baptist Church for many years. He loved watching golf, tennis, political show and spending time with the family. He was a happy go lucky guy, full of jokes and laughter. He loved his tacos, fish and okra, joking with his sister about her cooking while having coffee and breakfast every morning. We call them the Golden Girls. He will truly be missed but never forgotten. Charles leaves to cherish his memory, two sons, Curtis (Jessica) Morris, Charles Antoun Morris; step-kids, Casandra, Erica, Sampson and Ebony; grandchildren, Briana, Delana, Terell, Sieshay, Tamdra and Charles, Jr.; great-grandchild, Dakari; a host of grandchildren; one sister, Jettie M. Hoggs; two nieces, Gloria (Robert) Hughes and Renina Lane; one nephew, Welton (Selinda) Hoggs; great-nephews, Lionel Baldwin, Alfred (Crystal) Murphy, Kevin (Allisha) Hoggs, Wilson Gaines and Jerome Morris; great-nieces, JaQuaya Iajnell, MyAngel, Nevaeh, Rametra and YaTavia and a host of other great-nieces, nephews and cousins including special cousins, Sammie Lee and Earline Gloss who he truly loved and they love him dearly. He also leaves a sister-in-law, Mary, other relatives and friends including Ronald Sawyer aka “Dunk”, Robert Hughes, James and Loretta Norwood, Lionel Kilburne, Hank, Patrick, Lillie Cooper and Ebony. Mr. Morris was preceded in death by his wife, Essie Pearl Morris; brothers, LeCester, Howard Lee and Levell Morris; brother-in-law, Welton Hoggs, Sr.; two nieces, Pamela E. Morris and Edna L. Hoggs. The family would like to express special thanks to Covenant Cooper, Veterans Association, the visiting nurse, Theresa and friends and family who supported us through this time with food, prayers, monetary gifts and cards. Funeral service will take place at 12:00 P.M. on Tuesday, March 2, 2021 at Evans & Browne's Funeral Home, 441 North Jefferson Avenue, Saginaw, Michigan 48607. Dr. Willie F. Casey will officiate. Visitation will be from 9:00 a.m. until the time of service.

Charles was born to Willie Mae and Jaice Morris in Orville, Alabama on a joyful day on June 23, 1931. On Saturday, February 20, 2021 at the age of 89, Charles E. Morris transitioned to be in the presence of the Lord. After leaving Alabama,... View Obituary & Service Information

The family of Mr. Charles E. Morris created this Life Tributes page to make it easy to share your memories.

Charles was born to Willie Mae and Jaice Morris in Orville, Alabama...

Send flowers to the Morris family.