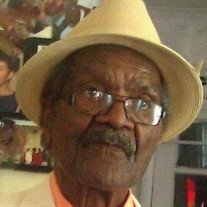 Deacon Clarence Myles our father, grandfather, great-grandfather, great-great-grandfather, and uncle, transitioned to his heavenly home on Wednesday, March 17, 2021, at the age of 97 years. A devoted husband to his wife of sixty–nine years Alberta (Wilson)Myles (our mom), who made for him a loving home and life, filled with lasting, cherished memories. To their union were born three daughters and five sons to carry on his legacy. Clarence Myles was born on August 23, 1923 in Yazoo City, Mississippi to Arthur and Albirdia (Johnson) Myles. At age 19 Clarence joined the U.S. Army in February, 1943, faithfully served his country during the World War II until he was Honorably Discharged in January, 1946. Upon returning home from the war his mom introduced him to the love of his life, Alberta Wilson whom he married. They moved to Michigan and he began working for General Motors at Saginaw Malleable Iron and retired after 28 years of dedicated service. Although he worked for General Motors, he was very passionate about his Mercury’s and Fords. To supplement his income to support his large growing family he always did auto mechanic’s work. He earned a certificate in Auto Mechanics from the Southern Trade School in Greenville, MS and he also attended school and earned a certificate for Gun Mechanics while serving in the U.S. Army. Our father was a kind, quiet, and gentle soul, he never complained. Always gracious and always a gentleman. Family, friends, and neighbors could always depend on him for anything. Our dad was always known to fix everything. You put it in front of him he would figure it out. “Jack of All Trades” even while working for General Motors he would always put in suggestions to prevent the line from breaking down and to make the line run more efficiently. He was truly a giver. He was also a teacher in many areas, he taught all his children, grands, great grands, and relatives work ethics at an early age. He and our mom believed that an idol mind is the devil’s workshop. So, they kept everyone around them busy and not too much TV. He was truly a family man. Every Sunday was like Thanksgiving; lots of food, family, and friends. He loved picnics and baseball games on the holidays. He loved going south every year to Mississippi and Arkansas and also to Wisconsin and Kalamazoo, MI to visit family. He loved boxing and did amateur boxing for a time. If there’s was a fight on, dad would be watching. He loved telling jokes, at times, dry humor. He and his brother-in-law, John Atkins would entertain us for hours laughing and telling jokes while visiting over the holidays. He also loved to read. He loved studying his bible, reading the newspaper, his black magazines; Jet, Ebony, and the Final Call. He loved supporting black businesses. When we went south every year, he always spent money at the black business establishments. Our father met God at an early age but often expressed “I Corinthians 7:14”, the unbelieving husband is sanctified by the wife. It was not long after they married, he established a personal relationship with God and he remained faithful. In 1955 he became a member of the former All Nations Prayer Tower Church of God in Christ under the leadership of the late Dr. William K. Moore and served later under Pastor Louis Bishop, now known as The Nations Church. He was ordained a Deacon and became a great asset to the Church. Our Dad love to sing and conduct testimony service. He sung in the adult choir and with the male singing group. He became the choir president. He loved to play the guitar, the harmonica and playing the tambourine. He was president and of the Youth Department and worked very hard for the youth and supported all the fund raisers and travels. One particular fundraiser where, Deacon Myles sold enough oranges to help purchase the first church van. He loved Sunday School and was a very effective Sunday School teacher. He loved to pray and was the church custodian for over 10 years. He gave with his time and money. In 2011 he joined Immanuel Ministries, to help support his son, Pastor Jerry Myles and remained a faithful member until the Lord called him home. “Always a gentleman unto death”. One of his favorite scriptures was “Psalms; 15” and he exemplified that kind of life. Clarence leaves behind a lasting legacy. His memory will be especially cherished by his living children, Ivory (Malik) Myles, Columbus OH, Clarence D. Myles, Whitmore Lake, MI, Charles Myles, Jerry (Rosemarie) Myles, Dexter Myles, Doris (Tarrance) Humes, Jr., all of Saginaw, grandchildren: Donjudus (Janene) Myles, Columbus OH, Resheda Myles, Cincinnati OH, Charleston (Beth) Hughes, Toronto, Canada, Maria Delesantos, Detroit MI, Darius (Ashley) Baldwin Myles, Largo, Maryland, Kiera Myles, Detroit, Dexter Myles, Jr., Atlanta, GA, Jerry Myles Jr., Kalamazoo, MI, Ligaya (Rondell) Galvin, Arlington Texas, Tarrance (Margie) Humes III, Grand Rapids, MI, Kenyetta (Mark) Myles, Teryn (Paries) Myles, Jamilah Humes, Omari Humes, Jalen Clarence Myles, Shidana (David) Goodwine all of Saginaw, MI; 26 great-grandchildren and four great-great- grandchildren. They raised three of their grandchildren; Donjudis Myles, Resheda Myles, Kenyetta Myles and five great-grandchildren; Raychan Williams, Dwayne Myles, Ja’Vallie Pinkston, Deanna Graham and Dontae Corleone. They also help raised many nieces and nephews. Deacon Myles was preceded in death by his loving and devoted wife, Alberta Myles; two daughters, Hazel Myles-Butler and Barbara K. Myles; his parents, Arthur (Albirdia) Myles; three sisters and their spouses, Annie Lee (John) Atkins, Rose (Henry) Tyler, Augusta Walker; four brothers and their spouses; Willie (Bill) Myles, T J Myles, Thomas (Eula) Myles and Jack (Earlean) Myles. Funeral service will take place at 11:00 A.M. on Tuesday, March 30, 2021 at The Nations Church, 608 South 20th Street, Saginaw, Michigan 48601. Pastor Michael Hayes, Host Pastor and Pastor Jerry Myles will officiate with interment in Forest Lawn Cemetery, 3210 South Washington Avenue, Saginaw, Michigan 48601. Visitation will take place Monday, from 2:00 - 6:00 p.m. March 29, 2021 at Evans & Browne's Funeral Home, 441 North Jefferson Avenue, Saginaw, Michigan 48607.

The family of Deacon Clarence "Turk" Myles created this Life Tributes page to make it easy to share your memories.

Send flowers to the Myles family.