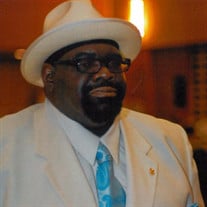 On March 22, 2022, Clifton parked his Cadillac and caught the angel-filled golden chariot God had sent for him. Clifton James Brooks at the age of sixty-five, took flight to his Heavenly home on Tuesday afternoon with his life partner beside him. Clifton was born on January 23, 1957 in Saginaw, Michigan to Mrs. Ethel Austin McKandes and Mr. Bill Brooks. He was the youngest of seven children. He was a lifelong resident of Saginaw and attended Saginaw Public Schools. His hobbies included playing cards, fishing, playing practical jokes, playing Pokeno, eating, cooking, watching movies and listening to cool music. He loved big fancy cars, watching football and basketball games. To know Cliff was to love him. He was one of a kind. He met no strangers and instantly made you fell like one of the family. He was jovial and comical. He had a heart-warming and humorous personality. Cliff loved life and lived in it on his own terms and to the fullest. His motto was: “Don’t worry, enjoy, and be happy because tomorrow is another day.” Clifton will be missed by all those whose lives he touched with his laughter, hearty smile, and his outlook on life. Clifton leaves to cherish the never-ending memories, his faithful, caring, loving and life partner, Geneva Pringle; sister, Delores McNair; nephews, Robert McKandes, New York, Darnell McKandes, Saginaw, Bernard McKandes, CA, Melvin McKandes, Jr. (Bessie), Saginaw, Craig McKandes, WI, Roland Austin, Jr., GA, Raphael Austin, Saginaw, Jarvon Howard (Briana) Saginaw, DeWarne McNair (Felicia) and Myron McNair, Saginaw; special cousin, Annie Jordan; nieces, Kimberly Austin, Saginaw, Tracy Austin Hernandez (Frank), New Baltimore, MI, Rashaun Austin, GA and Jimeka McKandes, IL; sisters-in-law, Audrey J. McKandes and Dorothy McKandes, both of Saginaw. He also leaves behind a host of great and great-great nieces and nephews, cousins, many other relatives and friends who will cherish his memory and love. He will be greatly missed by his longtime friends, Sherwain Mack, Clifford Harris and Charles Stidum. He was preceded in death by his parents, Ethel Austin McKandes and Bill Brooks; brothers, Robert, John and Melvin McKandes and Roland Austin; sister, Ruby Austin; niece, Berlene McKandes “DeeDee”; nephew, Rodney Austin and special cousin, Billy Jordan. Funeral service will take place at 11:00 a.m. on Wednesday, April 13, 2022 at Evans & Browne's Funeral Home, 441 North Jefferson Avenue, Saginaw, Michigan 48607. Pastor James Hodge will officiate. Visitation will take place at the funeral home on Tuesday from 2:00 until 6:00 p.m. Family will be present from 5-6 p.m. to greet friends.

On March 22, 2022, Clifton parked his Cadillac and caught the angel-filled golden chariot God had sent for him. Clifton James Brooks at the age of sixty-five, took flight to his Heavenly home on Tuesday afternoon with his life partner beside... View Obituary & Service Information

The family of Mr. Clifton James Brooks created this Life Tributes page to make it easy to share your memories.

Send flowers to the Brooks family.