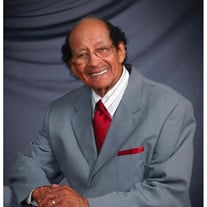 Clyde Robinson Sr. passed away Thursday, December 2, 2021 at the age of 88 years. He was born on March 6, 1933 in Eupora, Mississippi, the son of Frank & Leila Beatrice Robinson. Clyde was the fifth of ten children and a twin brother, to the late Rev. Clevion Robinson. Clyde and his wife, Mae Pearl (Miller) Robinson, met at the age of 12 and enjoyed a blissful marriage of 68 years. They were joined together in holy matrimony in May of 1953. In the same year, Clyde was drafted by the U.S. Army where he served in Korea for two years in the same unit alongside his twin brother. After Clyde was honorably discharged for his service, he came to Saginaw in 1955 with his wife and son Clyde Lavern. Clyde was the first of his family to come to Saginaw and join Mount Olive Missionary Baptist Church, where he remained a faithful member until his passing. He led a decorated life of service to his community and to his church. While a member at Mount Olive, Clyde was on the usher board and also a member of the Laymen’s, the finance committee, and the transportation ministry. Other organizations that Clyde participated in include the Big Brothers Association, a member of the Masonic Lodge, and service on the board of directors for the Credit Union for over 37 years. Clyde continued the remainder of his occupational career in the manufacturing plants of General Motors in Flint, MI. He was a committee man for the UAW and retired from GM in 1987 after 30 years of service. During the time of his employment, Clyde established two successful businesses: Robinson’s Auto Clinic and Xpress Mart. These businesses collectively prospered in the Saginaw community for over 44 years. Clyde’s family later grew to include three additional children: Sheryl Jean Robinson, Doyle Wayne Robinson, and Reginald Lloyd Robinson. From these offspring came 12 grandchildren, 22 great grandchildren, 1 great great granddaughter, and one daughter-in-law, Barbara (Doyle) Robinson. Clyde leaves behind an extensive family of relatives, church members, and friends with whom he shares many memories. A Special Friend JOE WYATT. He was preceded in death by his parents, brothers Clevion & Earon, and twin siblings Eldridge and Evelyn. Clyde is survived by his sisters Clara, LaDarius & Lois, and brothers Frank Jr. and Curtis. The Robinson family would like to extend a special thanks to the Covington Visiting Nurses Association, who played an instrumental role with Clyde’s care. Mary Johnson was so helpful with answering questions and supplying any medical needs. Neenia Matungways Were invaluable in keeping us informed and what to anticipate in my dad’s expected prognosis while he was on hospice! the personal attention Provided by Neenia Always left Us feeling that she cared for our dad as though he was her own father, she will always have a special place in our hearts for her attention to detail and her kindness! The funeral service will take place at 11:00 a.m. Wednesday, December 15, 2021 at Evans & Browne's Funeral Home, 441 North Jefferson Avenue, Saginaw, Michigan 48607. Pastor James H. Nelson will officiate with interment in Roselawn Memorial Gardens, 910 North Center, Saginaw, MI 48603. Friends may call at the Evans & Browne's Funeral Home, 441 N. Jefferson Ave., Saginaw, MI 48607 on Tuesday from 2:00 until 6:00 p.m.

Clyde Robinson Sr. passed away Thursday, December 2, 2021 at the age of 88 years. He was born on March 6, 1933 in Eupora, Mississippi, the son of Frank & Leila Beatrice Robinson. Clyde was the fifth of ten children and a twin brother, to the... View Obituary & Service Information

The family of Mr. Clyde Robinson created this Life Tributes page to make it easy to share your memories.

Send flowers to the Robinson family.