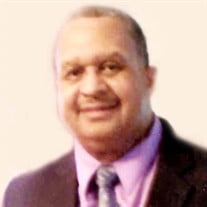 Our beloved, Deacon Connie Reeves passed away on Saturday, May 30, 2020 at the age of 66 years. Visitation will be from 2:00 until 5:00 p.m. on Wednesday, June 10, 2020 at Evans & Browne's Funeral Home, 441 N, Jefferson Ave., Saginaw, MI 48607. A private funeral service will be held. Pastor Vincent D. McMillon will officiate with interment in Forest Lawn Cemetery, 3210 S. Washington Ave., Saginaw, MI 48601. Deacon Connie Reeves was born on October 17, 1953 in Headland, Alabama to Otis Reeves and Margie Vickers Reeves. He transitioned to his heavenly home on Saturday, May 30, 2020 at the age of 66 years. He was the 8th child of 10 children, having four brothers and five sisters. In 1965, the Reeves Family moved to Saginaw, Michigan when Connie was 11 years old. Connie graduated from Saginaw High School in 1974. He was one of the most admired and respected members of his class. He matriculated through Central Michigan University where he earned a Bachelor’s of Science Degree in Communications in 1978. Connie’s work ethic and easy going personality allowed his employment opportunities to flourish. He was the manager of McDonalds and Rib Shack. He was employed at Saginaw Manufacturing and later at Eaton Plant for a number of years. Dow Corning was very fortunate when he accepted the position as Chemical Operator. He retired from Dow Corning in 2016 with over 20 years of service. On February 17, 1979 Connie made a lifelong covenant to God and the love of his life, Marlyn. The grace and favor of God allowed Connie and Marlyn the blessing of raising two amazing, dynamic daughters: RaKeesha and RaShonda. He was very athletic and enjoyed playing football, basketball, and baseball. He shared his love for sports with RaKeesha. His favorite professional teams were: New York Yankees- Baseball, Dallas Cowboys and Detroit Lions-Football, and Detroit Pistons-Basketball. Connie was also quite musically inclined. It was a passion that he passed on to RaShonda. He enjoyed singing and listening to music. He was inspired by gospel music and also inspired others through his spirit-filled singing. In 1976, Connie was baptized by Rev. Columbus Clayton and ordained a Deacon on September 27, 2009. Deacon Reeves was consistent in his commitment to Christ and engaged himself in service to numerous ministries at his church; St. Paul Missionary Baptist under the leadership of Rev. Dr. Vincent McMillon. Deacon Reeves’ work for the Lord has proven to be a true example of faith, love and praise. He was truly a man after God’s own heart and he dedicated his life to the stewardship of service. His ministries include: -Sunday School Teacher- Adult Class -Treasurer of the Deacon Board -President of the Male Chorus -Member of the St. Paul Unity Choir -Co-Director of Vacation Bible School (2017) -Co-Chairmen of Men’s and Women’s Day Event (2018) Deacon Reeves leaves a legacy of service, love and labor to God and God’s people. He was a constant representation of God’s love exemplified. Deacon Reeves leaves to cherish his memory, his lovely wife of 41 years, Marlyn; two daughters, RaKeesha Reeves-Pelt (Andrew) of Richmond, TX, RaShonda Reeves of Brooklyn, NY; one grandson, Cameron Pelt, two sisters, Mary Sutton, Gloria Jones; two brothers, Curtis Reeves (Joyce), Isaac Reeves (Rosemary), all of Saginaw, MI; six god-children, Geneva Culbert of Warren, MI, Robert Gaines, III of Ypsilanti, MI, William Terry Bracken II, Toya Stacy, Ken Gandy, and Braxton Williams, all of Saginaw, MI; A special niece whom he helped raise, Margaret “Lovie” Gandy-Whitson; one uncle, Sammy Vickers; one aunt, Addie Harper; one brother-in-law, Anthony Lilly of New York, one sister-in-law, Billie Curry, and a host of nieces, nephews, other relatives, and friends. Deacon Reeves was preceded in death by his parents, Otis and Margie Vickers Reeves and five siblings: Woodrow “Willie” Otis, Willie Earl, Odesta Ingram, Olivia Gandy, and Eyvonne Matthews.

The family of Deacon Connie Reeves created this Life Tributes page to make it easy to share your memories.

Our beloved, Deacon Connie Reeves passed away on Saturday, May...

Send flowers to the Reeves family.