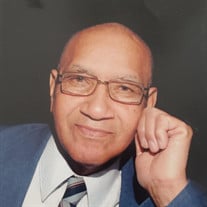 Corsemore Collier &#8220;Cosmo&#8221; was born on July 23, 1928 in Louisville, Mississippi, to the late Frank Collier Sr. and Angie Lee Woods-Collier. With his family by his side, he took his last breath on this earthly world and took his... View Obituary & Service Information

The family of Mr. Corsemore "Cosmo" Collier created this Life Tributes page to make it easy to share your memories.

Send flowers to the Collier family.