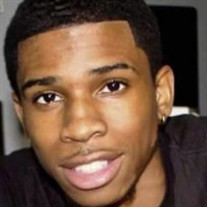 A Star was born on Friday, January 14, 2000 and that light shone bright til October 10, 2021. Darius had so much talent, so much creativity, so much capacity to bring life to others, and such a bright future; the world is a lesser place without him. He touched so many lives; we choose to celebrate his triumphs instead of this senseless tragedy. Darius loved so many and was loved by so many more. Because of this, we will always be connected… THIS IS THE STORY OF DARIUS TA’VONCE JACKSON... Darius and his mother, Tasha Jackson, shared a bond that cannot be broken by space and time. Although he will be sorrowfully missed, she will live on to cherish his memory and honor his legacy along with his dads; Ahmad Ervin and Donnell Ruffin, his siblings; Camille Ervin (his baby) Rahim Ervin, China King, and Donnell and Evan Ruffin, his niece; Maleah, his special cousins; Corion Jackson (more like a brother), Amari Dawkins and Andrea Taylor, his grandparents; Roger and Carol Jackson, Eunice Ervin, Hilda and Lawrence Ruffin, his aunts and uncles; Lakessa (Andre) Taylor, Jan-Nice Bradshaw, Shavon Mason, Tonya Ruffin, Roger Jackson Jr., Timothy Currington, Mario Jackson, David and Lawrence Ruffin, his great aunts; Mary Ann (Jerome) Kennedy, Wanda Currington and a host of other relatives and loved ones. His Great Grandparents; James and Mattie Jackson predeceased him. His close friends; Tony Martin and TJ Steward will welcome Darius on the other side. He was born with a type of energy that had people gravitate towards him and it couldn’t be denied. For those who shared a bond like blood, his tribe; Paige Sanders, Tayah & Nia Young, Parys Rogan, Adia Jackson, Demetria, Jahari Essex, Charles Green, CJ McKinley, Ashanti, Kewaun Davis, and a host of others, we understand. Although, it may feel like you have lost a shining light in your lives his legacy will live on because you were His tribe! Darius exhibited his creativity and talents from a young age. His parents, Tasha Jackson and Ahmad Ervin supported his dreams and fostered Darius’ gifts and abilities with lessons and training as well as instruments, equipment, and his very own studio. At a very young age he was introduced to artists such as; Frankie Limon and The Jackson Five and if you were around Darius, you know we all went through the ‘Mike’ phase together! He was not a shy kid he was funny and confident, so by the time he was 7 years old he was performing, Michael Jackson’s song and dance routines on Broadway St in Downtown Nashville, Tennessee. Darius was an incredible drummer, at a very early age he started playing the drums at his home church, Lewis Temple COGIC, and by the time he was 10 years old he became the drummer for New Covenant Christian Center Music Department, where he was also a member. Darius was an instrumental part of the Saginaw Drumline, under the tutelage of Mr. Edwards and Miss JC. In addition, Darius was most presently acting as an Assistant Band instructor for Saginaw High School and Arthur Hill High School. He was awarded a scholarship to Kentucky State University for Band. Darius “FAMO” Jackson was pursuing his dream in music; he was a popular local music producer, singer, songwriter, and musician. He especially excelled in voice, keyboard, and percussions. Darius was working with his mentor in Atlanta, Georgia, Zaytoven, famous music record producer, DJ, and keyboardist. His latest EP titled, “Hear Me Out”, his full LP is due to drop very soon and has been well anticipated. His music is featured on various streaming and social media apps such as; YouTube, Instagram, Facebook, Apple Music, and Spotify. He excelled at sports and athletics; he earned the title of Golden Glove Boxing Champion in 2015. Darius was also a sought-after track and field star for Saginaw High School. He participated in the 100-meter, 200-meter, and 400-meter relay, he and his teammates would go on to receive numerous medals and championships. Darius was taught a strong work ethic from his parents and was active with his community; he participated with First Ward Community Center’s Summer Youth Employment Program in 2019, where he was employed with the DNR. Currently, Darius was due to start employment at Amazon. In just 21 years, Darius accomplished more than most, from gold medals and championship titles to producing multiple LPs and being mentored by his role model in music. We love him and we are so proud of what all he accomplished on Earth. He will continue to stay with us all through the memories and the music. His legacy will live on. Funeral service will take place at 11:00 a.m. on Friday, October 22, 2021 at New Covenant Christian Center Church, 2395 South Outer Drive, Saginaw, MI 48601, Bishop Ron Frierson, Host Pastor. Pastor Fred Lewis will officiate. Friends may call at the Evans & Browne's Funeral Home, 441 N. Jefferson Avenue, Saginaw, MI 48607 on Thursday from 2:00 p.m. until 6:00 p.m.

A Star was born on Friday, January 14, 2000 and that light shone bright til October 10, 2021. Darius had so much talent, so much creativity, so much capacity to bring life to others, and such a bright future; the world is a lesser place without... View Obituary & Service Information

The family of Mr. Darius Ta'Vonce Jackson created this Life Tributes page to make it easy to share your memories.