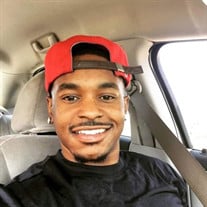 With deepest sorrows, we announce our Deshawn Willie Mills, age 31, a most beloved son, father, brother, grandson, family member and friend were called home suddenly on February 5, 2022. Deshawn Willie Mills was born on March 5, 1990 in Saginaw, Michigan to a family that loved him dearly. His mother, Sabrina Morris-Crimes made sure that Shawn knew God. He was baptized young and attended church regularly during his youth. Deshawn attended Calvary United Methodist Church where he sang and rapped in the youth choir and was a member of the usher board under the leadership of Rev. John K. Bennison. He later became a member of Ames United Methodist Church. As a child, Shawn was always very active. He could be found in the backyard doing backflips off the picnic table or playing basketball with his sister and neighborhood friends. Even as a young man, he loved competitive basketball and was always up for a good game. He joined many basketball leagues and was seen on the news for his skills. He loved working out at home or at one of the local gyms. He enjoyed watching his favorite basketball teams, playing video games, cards and being around those who made him happy. He was very particular about the way he dressed so he designed and developed his own clothing line called, “Life.” He chose that name because he thought life was amazing and it should be lived to the fullest. Shawn was a proud and hard-working employee at Coca-Cola. Mr. Deshawn Mills is survived by his only son, DeShawn Mills, Jr. (his mother, Keiara Lewis). He also leaves to cherish his memory, his mother and stepfather, Sabrina and Ernest Crimes; two sisters, DeShania Mills and Brianna Humphrey; grandparents, William and Thelma Wyatt; aunts, Geraldine Hines, Shirley Harvey, Jacqueline Young, Debra Wyatt-McCain and Avy Wyatt; uncles, Garfield Wyatt, Robert Simmons, Elton Simmons, Freddrick Simmons, Derrick Wyatt and Herman McCain; first cousins, Derrick Wyatt, Jr., Devon Wyatt and Dietrich Wyatt; other cousins, Audra Morris, LaToya Banks, Audrianna Bradshaw, Mark Bradshaw, Damarlan Brooks, Jr., LaMarcus Harvey, Kendrell Harvey, Freddy Jennings, Jr., Markterrian Harvey and many others; godmother, Mrs. Ruth Sharpe and special friends, Jason Moore and Joshua Sawyer. He was preceded in death by his great-grandmothers, Alberta Morris and Annie Ruth Wyatt; great-aunts, Annie Rose Stephenson and Dorothy Morris; uncle, Larry Simmons and a cousin Samuel Watkins. The funeral service will take place at 11:00 a.m., Monday, February 21, 2022 at Mt. Nebo Missionary Baptist Church, 1111 North 29th Street, Saginaw, Michigan 48601. Pastor Willie Hill will officiate with interment in Buena Vista Cemetery, 612 South Airport Road, Saginaw, Michigan 48601.

The family of Mr. DeShawn Mills created this Life Tributes page to make it easy to share your memories.

With deepest sorrows, we announce our Deshawn Willie Mills, age...

Send flowers to the Mills family.