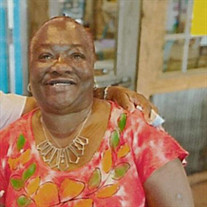 Ms. Diana Carol (Boo) Miree passed away on Wednesday, May 11, 2022 at the age of 60 years. She was born on August 3, 1961 in Texarkana, Arkansas to Opal and Henry Coleman, Jr. Diana received her diploma from Carrollton High School and was... View Obituary & Service Information

The family of Ms. Diana "Boo" Miree created this Life Tributes page to make it easy to share your memories.

Send flowers to the Miree family.