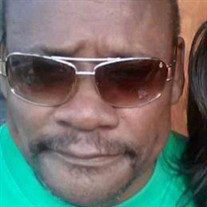 Doris Griffin was born April 4, 1954 in Saginaw, Michigan the son of Edward Parker and Vannie Mae Griffin. He passed away on February 13, 2021 at the age of 66 years. Doris attended Buena Vista High School. He was employed by General Motors... View Obituary & Service Information

The family of Mr. Doris Griffin created this Life Tributes page to make it easy to share your memories.