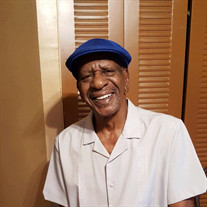 Mr. Earl Price, Jr. also known to many others as “Pain Killa, “Duke” and “2-4” was born in Kennedy, Alabama on August 7, 1944 to Cazzie Ree and Gene Earl Price. He passed away on Monday, April 18, 2022 at the age of 77 years. Earl attended the Walker County Training School in Jasper, Alabama, graduating in the “Class of 62”. After graduation, he enlisted in the U.S. Army where he served in Vietnam for two years. Earl was Honorably Discharged in 1967. Shortly after, he relocated to Saginaw, Michigan where he landed a job at the Grey Iron Foundry Div. General Motors Corp and was a member of UAW Local 668. Earl worked for 36 years before retiring in 1999. Earl was a sports fanatic, he watched sports from the time they started until they ended. When he was in his prime, he participated in various sporting events. He was in different bowling tournaments, had a basketball team called, “Good News” that played in the Gus Macker Tournament and he was also part of a soft ball league. Earl also enjoyed listening to music and sitting on the porch. He loved his sports, but the love he had for his only child, his “Ree Ree” was like none other. He also whole-heartedly loved his grandbabies, Ma-Ma, Lil Larry and Larryon. Earl was the true definition of a father and Papa. He was extremely proud of his family. Earl was an awesome man and anyone that came in contact with him instantly felt his pure genuine love. He was a very kind hearted, giving and free- spirited man, unless you tried to tell him something, then, he’d say, “Good gosh of me, you don’t tell me, I got this”. To know him was to love him. He touched so many people and he’ll be missed dearly. He leaves to cherish so many wonderful memories, his loving daughter, Shacera (Larry, Jr.) Johnson; three grandchildren, Shalarriana D. Wilson, Larry C. Johnson III and D’Larryon A. Johnson all of Saginaw; one niece, Carla Price; sister-in-law, Cheryl Marie Wison; significant other, Ann Hinton; many other relatives and friends including Jerome Holiday, Minnie M. Boykin and Sylvester Ivory. Mr. Price was preceded in death by his wife, Sherry Lynn Price; parents, Cazzie Ree and Gene Earl Price; brothers, James and Clarence Price; mother-in-law, Vernall Wilson; father-in-law, Wilmer Wilson; sister-in-law, Sandra Price. Funeral service will take place at 10:30 a.m. on Friday, April 29, 2022 at Evans & Browne's Funeral Home, 441 North Jefferson Avenue, Saginaw, Michigan 48607. Dr. Craig Tatum, Senior Pastor will officiate. Interment will take place in Great Lakes National Cemetery, G-4200 Belford Road, Holly, MI 48442. Visitation will take place at the funeral home on Thursday from 2:00 until 6:00 p.m. Family will be present to greet friends at 5pm.

The family of Mr. Earl "Pain Killa" Price, Jr. created this Life Tributes page to make it easy to share your memories.

Mr. Earl Price, Jr. also known to many others as “Pain Killa,...