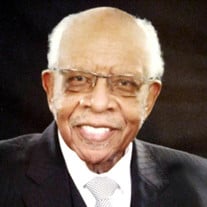 Jesus said: I go to prepare a place for you. And if I go and prepare a place for you, I will come again and receive you to Myself, that where I am, there you may be also. John 14:2-3 NKJV I said: My ministry is fulfilled. I am already being poured out as a drink offering, and the time of my departure is at hand. I have fought the good fight, I have finished the race, I have kept the faith. II Timothy 4:5-6 NKJV Roosevelt Austin, Sr. was born on August 17, 1926 in Opelousas, Louisiana, to Gabriel and Pearl Castille Austin. He was the last surviving child born to their union. In the early hours of Thursday, June 11, 2020, while surrounded by his family, Reverend Dr. Roosevelt Austin, Sr.’s soul was summoned by God. His eyes were gently closed as he entered sweet and eternal rest with his Lord and Saviour. Religion always played a major role in the exemplary life of Reverend Dr. Roosevelt Austin, Sr. He was converted on April 7, 1936, and ordained in the ministry on June 25, 1953. To him, Christianity was not something to be acknowledged only on weekends – it was a way of life. He began as a youth minister at the Mt. Calvary Baptist Church in Opelousas, Louisiana. Like Abraham, he left his family at the leading of the Lord, finally settling in Saginaw, Michigan. He joined and became an Associate Minister at the Zion Missionary Baptist Church of Saginaw. In 1956, he was called to the pastorate of Zion and served that congregation for 44 years. Upon his retirement he was bestowed the title of Pastor Emeritus, Zion Missionary Baptist Church, Saginaw, Michigan where he continued to serve under the leadership of Pastor Rodrick A. Smith. Spiritual endeavors pursued by Rev. Dr. Roosevelt Austin, Sr., include: Seminar Leader for the National Congress of Christian Education and Moderator of the Saginaw Valley District Association. He served as religious commentator for WKNX radio and a resource consultant and advisor for the Saginaw Valley District Congress of Christian Education. Pastor Austin served as President of the Wolverine Baptist State Congress of Christian Education. Pastor Emeritus Austin served as interim pastor at Saint Paul Baptist Church of Saginaw, Foss Avenue Baptist Church and Mt. Olive Missionary Baptist Church, both in Flint, Michigan Reverend Dr. Roosevelt Austin, Sr., realized the importance of reaching out to the community. He was involved with worthy projects like the Pastors Concern for the Poor, Poverty and Pollution, the Pastor and his Task in the Inner City, and recruiter for the Amachi Group Big Brothers & Big Sisters of Saginaw Bay Area. He held leadership positions with many organizations including the National Association for the Advancement of Colored People (NAACP), the Opportunities Industrialization Center of Metropolitan Saginaw (OICMS), Saginaw Public Schools, and member of Alpha Psi Omega. He served as a member of the Board of Directors for Citizens National Bank and was a former member of the Saginaw City Council. After completing his primary education in Opelousas, Louisiana, he continued his education attending Southern A&M University in Baton Rouge, Louisiana; Moody Bible Institute, Chicago, Illinois; Detroit Bible College, in Detroit, Michigan. He received a Bachelor of Theology degree from McKinley Roosevelt College, Chicago, Illinois (Th.B.), Master of Theology, Ohio Christian College, Columbus, Ohio (Th.M., Doctor of Divinity Degree (D.D.) American Divinity School, Chicago, Illinois, and in 1996, he was bestowed the Doctor of Humanities (Honorary) from Saginaw Valley State University, University Center, Michigan. He enjoyed seeing the world with Mrs. Austin as they traveled to The Holy Land, China, South America, Brazil, New Zealand and Australia, to name a few. Rev. Dr. Roosevelt Austin, Sr., demonstrated the value of family, spiritual growth, education and community; as he was an involved humanitarian who did everything within his power to help others. Because of his long and devoted efforts to offer spiritual and personal guidance, many lives were touched through the power of his faith. To that end, on May 30, 2018, 2nd Avenue in Saginaw, Michigan was renamed Roosevelt Austin Avenue. Celebrating his life and legacy until we meet again are his wife of almost 70 years (June 24, 2020), Dr. Nurame Mitchell Austin whom he lovingly called “Honey;” daughter, his “Princess,” Dona Austin-Bigby, Saginaw, MI; son, Dr. David W. (Dr. Doris Taylor) Austin, Indianapolis, IN; daughter-in-law, Debra Austin, Saginaw, MI; 7 grandchildren who affectionately called him “Gaumpy,” Roosevelt (Dena) Austin III, Oak Park, MI, Robert (Kelly) Bigby III, Milwaukee, WI; Dr. Nia Austin Bigby (Anthony Hamiter), Indianapolis, IN; Erin Shane Austin, Indianapolis, IN, Amber Nicole Austin, Herndon, Virginia, Elyse Noelle Austin, New York, NY, and Christina Taylor Austin, Boston, MA; great-granddaughter, Nia Marie Bigby, Milwaukee, WI; sister-in-law, Isabella Austin, Opelousas, LA; many nieces and nephews to whom he was father/uncle as all of his siblings preceded him; special daughter, Mary Frances McDonald and family Saginaw, MI; special cousin/son, Reverend Dr. Darrell K. (Jaffee) White and daughters Sierra (Phil) Ashe and Nia Elizabeth White; special grandson, Pastor Marcelle (Jennifer) Smith; special brother, James E. Jackson; special friends, Lucille (Buddy) Surles, and families of Dr. Robert (Winifred) Taylor, Terry (Carolyn) Pruitt, Reverend Dr. Marvin T. (Omie) Smith, Willie (Angenetta) Ervin, Mary Currie, the late Elizabeth Woods and the late Louise Archer; Pastor Rodrick A. (Irma) Smith and the Zion Missionary Baptist Church family. Pastor Emeritus Reverend Dr. Roosevelt Austin was preceded in death by his son, Roosevelt Austin II, parents, siblings, other relatives and friends. “The Eternal God is thy refuge; and underneath are the everlasting arms.” -Deuteronomy 33:27 Friends may call from 2:00 until 8:00 p.m. on Thursday, June 18, 2020 at Zion Missionary Baptist Church, 721 Johnson Street, Saginaw, MI 48607. A private funeral service will be held. Pastor Rodrick A. Smith will officiate with interment in Forest Lawn Cemetery, 3210 S. Washington Ave., Saginaw, MI 48601. In lieu of flowers those planning an expression of sympathy may wish to consider The Rev. Dr. Roosevelt and Dr. Nurame Austin Scholarship Fund, P.O. Box 40127, Indianapolis, Indiana 46240

The family of Pastor Emeritus Rev. Dr. Roosevelt Austin, Sr. created this Life Tributes page to make it easy to share your memories.

Send flowers to the Austin, family.