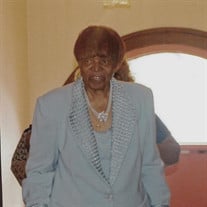 In the year of 1935 on May 30, a beautiful angel was born to the late parents, Idella and Jobie Johnson in Union Springs, Alabama. She was the third child born out of 15 children. On Sunday, January 3, 2021 that angel known as Mrs. Emma Lee McFadden, age 85 was air lifted by God back to heaven. She passed away at Covenant Medical Center after a lengthy illness she’d been battling for months. Emma accepted Christ at an early age and attended Second Baptist Church in Thompson, AL. Her first son whom she named Willie James Johnson as born while living there. Later she married Eugene MaHoney and they moved to Florida where she resided for several years before moving to Saginaw, Michigan in 1958. Once in Michigan, Emma took a job working at the Saginaw County Hospital for over eight years. She joined Tabernacle Baptist Church and attended regularly. Over the next nine years, she gave birth to four more sons whom she lovingly doted on. Her sons, all five of them were her pride and joy. In 1970, she started working for General Motors. In 1976 she married Leroy McFadden, unfortunately they divorced several years later. She parted ways with General Motors in 1983 coming out on disability. After which she devoted her time to family, church and sometimes going to the casino with family and friends. She was a member of Greater Philadelphia Church for some time but, at the time of her passing she was a devoted member of Jacob Ladder Baptist Church. At both churches she served on the Mother Board. Emma was also a longtime member of the Eastern Star Lodge. Her hobbies were traveling and working in her garden before she took ill. She was a very caring, loving, giving and funny person with a bold spicy attitude and strong faith in the Lord. She was the type of person that would give you the shirt off of her back but, put you in your place if you crossed out of line. Mrs. Emma Lee McFadden will be forever missed by, five sons, Willie James (Regina) Johnson of Saginaw, MI, Derrick DeWayne (Janice) Pearson, Boston, MA, James Raymond (Felita) Pearson, Luther Pearson, Jr. and Leonard Dale MaHoney, all of Saginaw, MI; one brother, Willie Frank Johnson (Domino), Saginaw, MI; four sisters, Annie L. Johnson, Brooklyn, NY, Velma (Malcolm) Roach, Saginaw, MI Linda Johnson, Montgomery, AL and Idella Johnson, Columbus, GA; one god-daughter, Noradrain Pierson; three sisters-in-law, Mary Johnson, Annie Johnson and Louise Johnson;13 grandsons, Fredlando and Brian Johnson, Derick Pearson, Jr., Kenneth Harris, La’Dante Riche, Robert J. Simms, Armie Brown, Luther, DeVonte, and Stephen Whitson, Lutherius Pearson, Drew Cannon, Deandre McCrary; 12 granddaughters, Audrey Tarver, Kenisha Price, Jaujawanda and Mekhi Pearson, Poricha Sims, Antwanisha Pearson Carroll, Ray’Cgelle Pearson, Shatarea Simms, Sieconda Bobbitt, Jasmine McCrary, Shana Rivers and Sandra Johnson-Childress; 34 great-grandchildren; a host of nieces, nephews, cousins and many other relatives and friends including a god-family, the Bakers and very close friends, Clairee McMillion Sanders, Blondell Prescott, Natasha Stuckey, Lula Pearson, Shirley Choyce, Sylvia Lowery and Ms. Gloria. Mrs. McFadden was preceded in death by her parents and five brothers, Albert Johnson, Henry Johnson, Bob Johnson and Bobby Johnson; three sisters, Tommie Burden, Lula Adams and Willie Seal Johnson; one grandson, Reggie Smith and one great-granddaughter, Mi’Angel I. Riche. Funeral service will take place at 3:00 p.m. Saturday, January 16, 2021, at Evans & Browne's Funeral Home, 441 North Jefferson Avenue, Saginaw, Michigan 48607. Pastor Melvin Hamilton, Jr. will officiate. Friends may call at the Evans & Browne's Funeral Home, 441 N. Jefferson Ave., Saginaw, MI 48607 on Friday, from 2:00 until 6:00 p.m.

In the year of 1935 on May 30, a beautiful angel was born to the late parents, Idella and Jobie Johnson in Union Springs, Alabama. She was the third child born out of 15 children. On Sunday, January 3, 2021 that angel known as Mrs. Emma Lee... View Obituary & Service Information

The family of Mrs. Emma McFadden created this Life Tributes page to make it easy to share your memories.

Send flowers to the McFadden family.