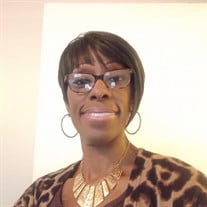 Ms. Felicia Ann (Thomas) Brown, known to most as Fee, Gained her wings on Thursday, January 13,2022 at the age of 46 years. Felicia was born to Reverend Neil and Annie (Lewis) Thomas on October 18, 1975 in Saginaw, Michigan. She attended Saginaw High School and after graduating attended Delta College, Eastern Michigan University and Saginaw Valley State University with intentions to get a Bachelor’s degree in secondary education. Although she never finished her college education, she pursued a degree for a long time before securing a job with the State of Michigan Unemployment Insurance Agency. She worked there for 18 years processing and adjudicating unemployment claims. Felicia was a caring and dedicated worker prior to her work with State of Michigan. She served as a leader for various youth groups sponsored by the Houghton-Jones Neighborhood Association and thoroughly enjoyed making a positive impact on the lives of young people. In addition to being a hard- working employee she was quite passionate about writing and published a book of poetry. During recent years she also had begun to write about her life-challenges and triumphs to be published in a memoir. Always a visionary, Felicia had the interests of others at the center of her dreams. She believed in improving the whole person and had goals of starting a breast cancer foundation, a program to assist abused women, and a home for teen moms. She was super giving and poured her all into the care of her son, Jordan. He remembers her as a loving and kind mom who helped him with everything he needed. One of his favorite memories of fun times together is a trip to Cedar Point. Felicia received Jesus Christ into her life at an early age and had a spiritual upbringing that led her to dedicate her life to serving and leading others to Christ. She gained much of her early Christian development at Zion Missionary Baptist Church under the leadership of the late Pastor Roosevelt Austin, Sr. In her later teenage years’ she grew in her Christian faith under the leadership of Pastor Audrey Parker’s Tuesday night bible study and then at Center of Attraction under Pastor James and Leona Glenn. While at Saginaw High School she was part of the Prayer Warrior (PW) youth group, spending lunch hours praying with a close group of friends. Her most recent place of practicing her faith and worshiping was at Christ Kingdom Ministries under the leadership of Apostle Edward Jackson and First Lady Mattie Jackson. Felcia was very serious about her Christian faith and dedicated her life to share her belief in Christ with others. Several of her friends have expressed that she led them to Christ with or helped them with their spiritual growth. She will be remembered for her passion, faith and love for Christ and having others share in that experience. Felicia leaves to continue her legacy her son, Jordan X. Thomas of Saginaw; mother, Annie L. Thomas, Saginaw; sister, Mary (Billy) Walker, Jamaica, NY; two brothers, Neil Thomas, Jr., Saginaw and Andre (Danielle) Thomas, Las Vegas, NV; god-son, KeAndre Buchanan, Troy, MI and she leaves numerous relatives and friends including a special cousin, Lorna Wilson who spent the last month with Felicia helping to care for her. Also, her friend and former husband of six years, John Brown. She was preceded in death by her father, Reverend Neil Thomas, Sr; paternal grandparents, Neil and Ora Lee Thomas; maternal grandparents, Dolphus and Elberta Lewis. Felicia’s family would like to give special thanks to Covenant Health Care doctors and nurses who provided exceptional care during her four-year bout with cancer and to Covenant Hospice care for their caring assistance during the last weeks of her life. The family requests expressions of sympathy be made to the “Jordan Thomas College Fund”. Contact Lorna Wilson for details: (678)406-0966, or you may contribute to the Go Fund Me (https://gofund.me/56ec6c12) established prior to Felicia’s passing. A private funeral service will take place Friday, 2:00 p.m. January 21, 2022 at Evans & Browne's Funeral Home, 441 North Jefferson Avenue, Saginaw, Michigan 48607. We ask that you join Ms. Brown's Ceremony of Life by webcast: click on obituary, Go to: photos and videos or media; Click on casket. :Apostle Edward Jackson will officiate. Friends may call at the Evans & Browne's Funeral Home, 441 N. Jefferson Ave., Saginaw, MI 48607 on Thursday from 2:00 until 6:00 p.m.

Ms. Felicia Ann (Thomas) Brown, known to most as Fee, Gained her wings on Thursday, January 13,2022 at the age of 46 years. Felicia was born to Reverend Neil and Annie (Lewis) Thomas on October 18, 1975 in Saginaw, Michigan. She attended... View Obituary & Service Information

The family of Ms. Felicia Ann Brown created this Life Tributes page to make it easy to share your memories.

Send flowers to the Brown family.