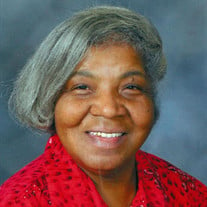 Mrs. Gloria Dean Harris passed away Sunday, February 13, 2022 at the age of 75 years. She was born September 21, 1946 in Clarendon, Arkansas the daughter of Herman Sanders and Pauline Thomas. Gloria resided in Saginaw, Michigan and was... View Obituary & Service Information

The family of Mrs. Gloria D. Harris created this Life Tributes page to make it easy to share your memories.