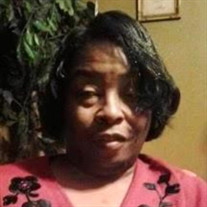 Ms. Gwendolyn "Faye" Coleman-Howard transitioned to her Heavenly life on Saturday Jan 23, 2022 peacefully at home surrounded by her family. Faye was born on May 14, 1961 to Judy Coleman and Tillman Howard in Alexandria, Louisiana. She moved... View Obituary & Service Information

The family of Ms. Gwendolyn Faye Coleman-Howard created this Life Tributes page to make it easy to share your memories.

Send flowers to the Coleman-Howard family.