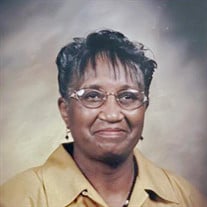 Hattie Lucille (Coleman) Qualls was born July 31, 1937 in Palmyra Island, Mississippi to Oliver, Sr. and Lillie Coleman. She was the third youngest of thirteen children born to their union. Affectionately called Lucille or Dee Dee by her family, she left the south as part of The Great Migration and settled in Saginaw, Michigan as a young teenager. Lucille attended Central Junior High School and graduated from Saginaw High School in 1957. Lucille accepted Christ at an early age and was a member of South 17th Street Church of Christ. She remained actively involved in the teaching and studying of God’s word as her health allowed. Lucille began her nursing career in 1962 at Saginaw General Hospital (Covenant Medical Center-Harrison) and later moved to St. Luke’s Hospital (Covenant Medical Center-Cooper). Her career path spanned rotations through several areas of specialty including Emergency Medicine, Surgical Unit, Pediatrics and Rehabilitation. She retired in 1999 from Covenant HealthCare Rehabilitation Center. Lucille developed an interest in sewing and perfected her craft to where she could design and turn out fashions with ease. She created many of her own dresses and suits, as well as those for her daughter and other close-knit family and friends. Sewing was her enjoyment and stress release. Lucille was a big sports fan, especially of NBA Basketball. Her favorite player was LeBron James. She watched his every move on and off the court the way some people watched soap operas. There wasn’t a day that went by when she wasn’t actively watching a basketball game. If it wasn’t a sporting event monopolizing her attention then it was the Western channel, old murder mysteries, classic movies or iPad card games occupying her time until the next basketball game. On Tuesday, September 14, 2021, at the age of 84, Lucille was called into eternal rest where she joined her parents, Oliver and Lillie Coleman; sisters, Lizzie Wilson, Estella Byrd, Irene Holmes, Julia Childress, Lillie Williams, Susie Henderson and Mary Lee; brothers, Isaiah, Roger, Henry, David and Oliver Coleman, Jr. Lucille leaves to cherish her memory, her loving husband of nearly 60 years, William Qualls, Sr.; one son, William E. Qualls, Jr.; one daughter, Sabrina (Freddie) Riggins; a host of nieces, including her niece and caregiver, Eunice Wilson; nephews, cousins, relatives and friends. She was also very fond of her two grand-dogs, Ziggy and Zoey, who always showered her with puppy love. Family hour 10:30 AM Saturday, September 25, 2021 at South 17th Street Church of Christ, 516 S. 17th Street, Saginaw, Michigan, 48601 with funeral service commencing at 11:00 AM. Minister Cedric Townsel is officiating with interment at Roselawn Memorial Gardens, 950 North Center, Saginaw, MI 48638. Friends may call at Evans & Browne's Funeral Home, 441 North Jefferson Avenue, Saginaw, Michigan 48607, from 2:00-6:00 p.m. on Friday.

Hattie Lucille (Coleman) Qualls was born July 31, 1937 in Palmyra Island, Mississippi to Oliver, Sr. and Lillie Coleman. She was the third youngest of thirteen children born to their union. Affectionately called Lucille or Dee Dee by her... View Obituary & Service Information

The family of Mrs. Hattie Lucille Qualls created this Life Tributes page to make it easy to share your memories.

Send flowers to the Qualls family.