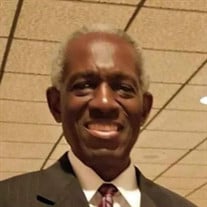 Henry Alexander was born on September 28, 1935 in Tuscaloosa, Alabama the son of Henry Alexander, Sr. and Lucy Mullens. Henry was a great man who wholeheartedly loved his family. He was a husband, father, grandfather, brother and friend. Henry attended Saginaw Public Schools as a child and after he completed his education, he went on to work for General Motors Nodular Casting Iron Plant as a General Foreman where he later retired. He had two hobbies that he loved, fishing and golfing. Golfing became his favorite hobby and after he retired, he spent most of his time swinging a golf club at the Green Acres Golf Course or The Sawmill Golf Club where he held memberships. So much can be said about a man who meant so much to his family. HE will forever hold the title of “World’s Best Dad and Granddad.” He cared for his family in a way that cannot be explained in words. We will always remember his “Smile”, the question; “What you know good?”, and the candy jar of Werther Originals. Henry Alexander leaves to cherish his memory, seven daughters, Yolanda Stokes, Debra McKinley, Sharon Smith (Richard), Alice Alexander-Jones (Virgil), Tracy Alexander (Joerg), Renee Alexander, Lucy Davis (James); two sons, Bruce Marshall and Henry Alexander (Bernita); 35 grandchildren; a tribe of great-grandchildren; one brother, Clarence C. L. Stokes; two nieces; two nephews and a special friend who he cared about dearly, Charlene Powell. Henry was proceeded in death by his wife, Katie Alexander; mother, Lucy Stokes; brother, John Frank Stokes (Lucy); sister, Lela Mae (Johnnie) Jaycox; sister-in-law, Mary Moorehead Stokes. Funeral service will take place at 11:00 a.m. on Thursday, April 21, 2022 at Evans & Browne's Funeral Home, 441 North Jefferson Avenue, Saginaw, Michigan 48607. Delwin Tatum will officiate. Interment will take place in Oakwood Cemetery, 6100 Gratiot Rd., Saginaw, Michigan 48601. Visitation will take place at the funeral home on Wednesday from 2:00 until 6:00 p.m.

Henry Alexander was born on September 28, 1935 in Tuscaloosa, Alabama the son of Henry Alexander, Sr. and Lucy Mullens. Henry was a great man who wholeheartedly loved his family. He was a husband, father, grandfather, brother and friend. Henry... View Obituary & Service Information

The family of Mr. Henry James "Crow" Alexander created this Life Tributes page to make it easy to share your memories.

Send flowers to the Alexander family.