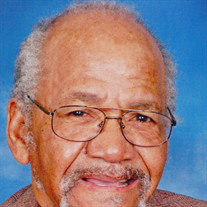 Henry Lee Jones, Sr. was born on April 5, 1931 in Tyronza, Arkansas to Robert and Lucille Jones. He passed away on February 23, 2021 at the age of 89 years. Deacon of Zion Missionary Baptist Church. He served as chairman of the Laymen Department,... View Obituary & Service Information

The family of Deacon Henry "Hi-Jack" Lee Jones created this Life Tributes page to make it easy to share your memories.

Send flowers to the Jones family.