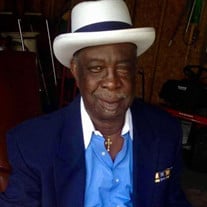 James Edward Lee, Jr. (Lay) was born May 22, 1945 in Kosciusko, Mississippi. He passed away on Tuesday, February 23, 2021 at the age of 75 years. He was the child born to James E. Lee, Sr. and Jewel (Mallett) Lay, and later raised by Grant Lay, Sr., who all preceded him in death. James Lay was full of joy and always giving of himself to help others. He was a dedicated husband, father, grandfather and great-grandfather. James moved to Saginaw, Michigan in 1964 where he married the love of his life, Bertha Cole. They were married for 54 years, and to this union, they were blessed with five wonderful children; Charles Lay of California, Marvin Lay of Indiana, Lavetta Lay (Reginald) Biddle of California, Erwin Lay (Shameah) of New Jersey, Jamie Lay of Grand Rapids and a special daughter, Denise McKinley of Grand Rapids. James Lay aka “Mule” to his friends and co-workers worked for General Motors for 40 years before retiring on March 31, 2005. He was a member of U A W Local 668. James transitioned from this life, but before leaving, he accepted Christ as his personal Savior and then he took his rest after a brief illness. He will be truly missed by ALL. James Lay also leaves to cherish his memory, 11 grandchildren; four great-grandchildren; five brothers, Grant Lay, Jr. of Saginaw, Larry (Inez) Lay of Flint, MI, Thomas Lay of Illinois, Dates Lee of Mississippi and Willie Lee of Texas; three sisters, Clydie Powell of Saginaw, Guranda Anderson of Flint, MI and Delores Austin of Missouri; six great-grandchildren; one aunt, Nora Turner of Saginaw, MI; a host of nieces and nephews; sisters and brothers-in-law, other relatives and friends. Mr. Lay was also preceded in death by two sisters, Shirley Lay and Agnes McDaniels; two brothers, James and Robert Lee. Funeral service will take place at 11:00 A.M. on Tuesday, March 9, 2021 at Word of Faith International Ministries 500 North Washington Avenue, Saginaw, Michigan 48601. Dr. Byron Hayes will officiate with interment in Forest Lawn Cemetery, 3210 S. Washington, Saginaw, MI 48601. Friends may call at the Evans & Browne's Funeral Home on Monday, March 8, 2021 from 2:00 until 6:00 p.m.

The family of Mr. James Edward "Mule" Lay created this Life Tributes page to make it easy to share your memories.

Send flowers to the Lay family.