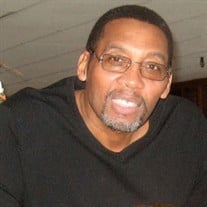 Jimmie Moultrie was born in Union Springs, Alabama on September 11, 1943 and departed this life on February 17, 2021. The second eldest of four children, Jimmie migrated from Alabama and was reared in Saginaw, Michigan by Joe and Louana Moultrie. He attended Saginaw High School, played football, and graduated in 1964. Soon after graduation, he landed a position at Chevrolet Grey Iron where he retired after 42 years. He was the epitome of family, generosity and had a one-of-a-kind work ethic. He believed in aiding family and it often extended to friends, neighbors, or strangers. He had personal relationships with many of his tenants and they were important to him. Jimmie was an advocate of education and was determined when taking on challenges until he would get them resolved. He was an avid lover of westerns, history, stocks, baseball and playing spades. Jimmie was a visionary and before his time in his entrepreneurial journey. His work ethic developed at a young age when he evaded field work by pushing the ice cream cart and working at First Ward. He was presented with an opportunity in his early teens to work with his Uncle George “Buddy” Moultrie where he learned the world of carpentry and his passion was ignited. After facing many challenges of securing loans for African Americans and license requirements, he was motived to take action in this area. Thereby, he landed a second job at the Sugar Beet Company in order to secure funding to purchase his first multi-family home in 1968, which resulted in pursuing his builder’s license. Later, he opened the Mahogany Lounge in 1982. His memory will be cherished by his loving partner, Marsha Calloway; three children, Verdayne, Stacey and Jay Moultrie; one grandchild, Britnae O’steen Moultrie; three stepchildren, Kathy Scott, Leroy Dee III and David Scott; eight step-grandchildren; his siblings, May Woods, Al (Cynetta) and Aprille Moultrie; three sisters-in-law, Loudean Moultrie, Marie (Tommie) Beasley and Vanessa (Stephen) Johnson; one brother-in-law, Philip Humes; an aunt, Pearl Dorsey and a host of nieces, nephews, cousins, and friends. He was preceded in death by his wife, Doris Stein, parents, Joe and Louana (Underwood) Moultrie and one brother, Herman Moultrie. At 5:00 p.m. the family will celebrate his life with comments from his friends and a pictorial tribute while listening to his favorite music during the visitation. Visitation will take place from 2:00-6:00 p.m. Wednesday, February 24, 2021, at Evans & Browne's Funeral Home, 441 North Jefferson Avenue, Saginaw, Michigan 48607. A Private funeral service will be held. With interment in Eastlawn Memorial Gardens, 7475 Holland Road, Saginaw, Michigan 48601.

Jimmie Moultrie was born in Union Springs, Alabama on September 11, 1943 and departed this life on February 17, 2021. The second eldest of four children, Jimmie migrated from Alabama and was reared in Saginaw, Michigan by Joe and Louana Moultrie.... View Obituary & Service Information

The family of Mr. Jimmie J. Moultrie created this Life Tributes page to make it easy to share your memories.

Jimmie Moultrie was born in Union Springs, Alabama on September...

Send flowers to the Moultrie family.