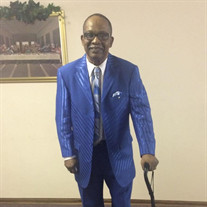 At home while being embraced by his wife, early on Monday morning, January 4, 2021, our beloved Joe Jackson exited his cancer ravaged body to receive healing and rest in the Lord! Age 72 years. On July 6, 1948, Joe made his entrance in Alligator, Mississippi to the late Dora (Jackson) Walker. He was the youngest of eight children and the “Apple of Mama’s Eye”. In 1960, following the death of his mother, he moved to live with his sister, the late Izora “Zippy” (Lee) Goodman and her family in Indianapolis, IN. After being educated in the public school district, Joe began seeking good employment, so he moved to Saginaw, Michigan where his late brother, Elbert “Hawk or E.V.” Walker lived and was hired at General Motors Malleable Iron Plant and retired with 30 years of service. He also was a member of UAW Local 455. Joe served in the U.S. Army and was a proud Vietnam Veteran. On July 6, 1984, he was united in marriage with Joe Ann (Harris) Bond. They were married thirty-six years. New Mount Calvary Missionary Baptist Church was Joe’s church home where he faithfully attended and served until his health failed. You would always find him at the door or in the vestibule, smiling and greeting congregants. After church or mostly any time, you could find him indulging in his favorite past time, which was sleeping! When awake, he enjoyed tinkering with gadgets. If anything was broken, nine times out of ten, he could fix it! Of all the things Joe enjoyed, the most rewarding was helping people less fortunate than him. NEVER, did he forget the GENEROSITY of others who helped him along life’s journey and in return, he ALWAYS found a way to BLESS someone else, which we now say, “pay it forward’. Left to cherish Joe’s memory is, his devoted wife, Joe Ann Jackson; three daughters, Trina Jackson, Starreese (Baa-Ith) Muhammad and bonus daughter, Dawn Marshall; two sons, Corey Jackson and Daryl Bond; five grandchildren who affectionately called him “PaPa”, Kishna, Tyler and Kayla Jackson, Sincere and Sea’Airra Rowan; two great-grandchildren, Novah and Santana Jackson; brother, Leroy Tealer; many special nieces which includes, Lucile (John) Trice and Emma “Patsy” Chambers; numerous special nephews including Elbert Walker, “Jr.”; sisters-in-law, Annie Lowery, “Miss Ann” and Ozella (Lavonza) Johnson-Mays; brother-in-law, Velton Lowery; many other cousins relatives and friends including, T.J. (Lois) Robinson, Dorothy King, John and Betty Packard, Dan Shivers, Lavera “Dell” Rowan, Jerome Buckley, Barbra Roberson, Tabitha Jones and Kristi Williams. Other than those already mentioned, Joe was preceded in death by, sisters, Lillie Mae (Frank) Goodman, Rosie Lee Smith and Willie Ester (Ray) Pamper; brother, Ernest Thomas; mother-in-law, Ella Harris “Madea” sisters-in-law, Rosetta Walker, Dorothy McCall, Carrie Bland, Elma Harris and Clara Walker. The family would like to express special thanks to Daryl, Sincere and Star for their help with Joe’s physical needs, also R. N.'s, Dana and Barb, C.N.A, Lindie from Americans Hospice Care, Evans & Browne’s Funeral Home, Pastor Alfred L. Harris, Jr. and New Mt Calvary Church Family and all who continuously and powerfully prayed… God heard and answered! In lieu of flowers and in HONOR of Joe, please consider someone you may know who needs a “Helping Hand” or maybe a stranger along the way that you can BLESS and brighten their day! Visitation will take place from 2:00-6:00 p.m. on Monday, January 11,, 2021, at Evans & Browne's Funeral Home, 441 North Jefferson Avenue, Saginaw, Michigan 48607. A private funeral will be held. Pastor Alfred L. Harris, Jr. will officiate with interment in Great Lake National Cemetery, G-4200 Belford Road, Holly, Michigan 48442. The funeral will be streaming live on our website.

At home while being embraced by his wife, early on Monday morning, January 4, 2021, our beloved Joe Jackson exited his cancer ravaged body to receive healing and rest in the Lord! Age 72 years. On July 6, 1948, Joe made his entrance in Alligator,... View Obituary & Service Information

The family of Mr. Joe Jackson created this Life Tributes page to make it easy to share your memories.

At home while being embraced by his wife, early on Monday morning,...