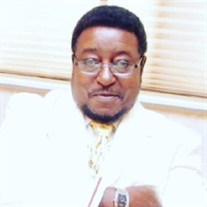 Deacon John H. Murry, our beloved husband, father, grandfather, brother, uncle and friend made his transition to glory on Sunday, September 6, 2020 at the age of 73 years. John Harry (Skipper) Murry was born January 10, 1947 to Isiah Skipper and Muryel Lee Murry in Wisner, Louisiana. He accepted Christ at an early age. After spending his early years in Wisner, Louisiana, he relocated to Detroit, Michigan where he attended Detroit Public schools and graduated from Detroit Northwestern in 1964. After graduation he relocated to Saginaw, Michigan. One day he caught a glimpse of the most beautiful girl he had ever laid eyes on; “Doris Ann Tate”, it was truly love at first sight! She became the love of his life. He was soon drafted into the United States Army in 1966 and they wrote each other love letters every day. After two years of service he received an honorable discharge and they were joined together in Holy Matrimony at the Tabernacle Missionary Baptist Church by Pastor R.B. Austin, September 14, 1968. Following the advice of his favorite scripture, Proverbs 3:5-6 to, “Trust in the Lord with all thine heart and lean not unto your own understanding in all thy ways acknowledge Him, and He shall direct thy paths. So, after graduation he moved to Saginaw, Michigan to live with his father. He found work at the A&P Grocery Store where he was such a dedicated, hard worker, he soon became Produce Department Head. By being a man of integrity, he was soon given the responsibility of locking the store up at night. Deacon Murry was later employed at Saginaw Steering Gear Div. GM (Delphi) always trying to better himself, he worked and attended Delta College and became a proud graduate earning an Associate degree in Applied Science in Skilled Trades to become employed as a Tool and Die Maker. He worked long and hard to support his family. His personal philosophy was, ”I don’t need nobody to give me nothing, open up the door, I’ll get it myself”! He was a member of UAW Local 699 and he retired after 34 years of faithful service. Deacon Murry confessed hope in Christ at the Tabernacle Missionary Baptist Church and was truly a dedicated servant for the Lord. He served in the Male Chorus, was former President of the Laymen Department, Church Treasurer and a very dependable Deacon. He loved the Lord with all his heart and he put his heart and soul in every song that he sang and prayer he prayed. One of his favorites, “I Woke Up This Morning with My Mind Stayed on Jesus.” He loved to bowl and had been on many leagues. He was truly a “Jack of All Trades” and could fix anything. He was a good provider to his family (a good man carries himself by how he carries his family), he was a good man. He was a good advisor, mentor, and a wonderful father figure to every young person that he came in contact with. Deacon John Murry, Sr. was famous for his Louisiana Bar-B-Que Ribs and his special secret sauce that his father taught him how to make. He left a legacy of wisdom, love and compassion that showed in everything he did for his family and friends. He was a pillar of strength and a solid rock for his family. Deacon Murry leaves to cherish many precious memories, his devoted wife of 51 years, Minister Doris Ann Tate Murry; three daughters and one son, Nakita Murry, Atlanta, GA, Nicole Murry, of Saginaw, MI, NaTosha Helen Murry, of Detroit, MI and John H. Murry, Jr., of Tennessee. He also leaves to cherish memories of their “Paw-Paw” two grandchildren, Azaria and Atierah Murry; four brothers, Johnny Ray Murry, Rufus Braggs (Terri), Rev. Isiah Skipper, Jr., Jerry Skipper (Anita), Flint, MI; his sisters, Frankie Jean Skipper, Norma (Larry) Walker, Flint, MI, Beverly Ann (Ronald) Coleman, North Carolina and Dorothy Farley (Andrew), Picayune, MS; brothers-in-law, Jerry Tate, Jr., Charles Tate both of Saginaw, MI and Richard Jones of Tennessee; an aunt, Ann Rose Murry, Detroit, MI; an uncle, Johnny Murry, New York; a host of god-children; nieces, nephews, cousins, and the entire Pendlepon, Haines-Tate and Champion families, including his best friends, Anthony Thurston (Gail), Joseph Lowrey (Leah), Bruce Taylor (Jessie) and Deacon Curtis (Wilmer) McZee. Deacon Murry was preceded in death his parents, Isiah Skipper, Sr. and Muryle Lee Murry; one sister, Rose Mary Jones; one brother, Deacon Willie Murry; father and mother-in-law, Jerry and Helen Tate; a sister-in-law, Frances Murry; brother-in-law, Larry Tate. Funeral service will take place at 11:00 a.m. on Thursday, September 17, 2020 at New Birth Missionary Baptist Cathedral, 3121 Sheridan Avenue Saginaw, MI 48601. Pastor Larry Camel will officiate with interment in Great Lakes National Cemetery, G-4200 Belford Rd., Holly, MI 48442. Friends may call at New Birth Missionary Baptist Cathedral on Wednesday from 2:00 until 6:00 p.m.

The family of Deacon John Harry Murry created this Life Tributes page to make it easy to share your memories.

Send flowers to the Murry family.