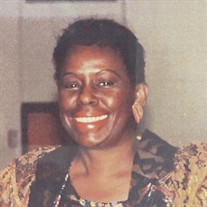 Juanita Mae Witherspoon was born on July 18, 1944 in Sylacauga, Alabama to the late James and Mable New. Juanita was the youngest of four children. She passed away on May 24, 2021 at the age of 76 years. Juanita Witherspoon was a resident of Saginaw, Michigan and a long-standing member of Zion Missionary Baptist Church in Saginaw, and St. Johns Baptist Church when living in Alabama. She had many accomplishments throughout her life, including becoming valedictorian of her high school class at Phyllis Wheatley High School in Childersburg, AL as did her siblings. She received her Bachelor’s degree in Sociology from Talladega College in 1967 before starting a career in social work. On June 13, 1970, she married Robert James Witherspoon at Zion Missionary Baptist Church (presided by Pastor Roosevelt Austin). She was also a proud member of Zeta Phi Beta Sorority, Inc., Zeta Omega Zeta Chapter beginning in the Spring of 1980. Juanita worked as a public guardian for Saginaw County before becoming independent in 1994 starting, Guardianship Services. After working for 20 years, she retired in 2000. She also taught as a substitute in the Saginaw School District after her retirement. She enjoyed traveling and visiting the casino before health issues slowed her down. She was a very avid supporter of the NAACP, organizing membership drives to ensure the local chapters carried out their mission. On a part time basis, she also worked with Big Brothers Big Sisters. She was a true believer in God and devoted member of her church including as a charter member of the Quality Of Life Ministry. She leaves to cherish her memory, two sons, Michael (Laurecia) Witherspoon of Allen Park, MI and Rolan (Michelle) Witherspoon of Fairfield, OH; five grandchildren, Michael Witherspoon, Jr. of Grand Rapids, MI, Kendall Elizabeth Witherspoon and Ella Grace Witherspoon of Allen Park, MI, Isaiah Witherspoon and Kyle Witherspoon both of Fairfield, OH; one brother, Samuel (Gwen) New of Auburn Hills, MI; sister-in-law, Evelyn New of York, ME along with many cousins, nieces, nephews, and many other special friends and family including Leola Wilson, Rosa Holliday and Shelva Veal. Mrs. Witherspoon was preceded in death by her parents, James and Mable New; her husband, Robert James Witherspoon; sister, Elizabeth Baker and a brother, James New II. The family would like to express special thanks to her godson, Will Ray Rodgers. Jr. Funeral service will take place at 11:00 A.M. on Thursday, June 3, 2021 at Evans & Browne's Funeral Home, 441 North Jefferson Avenue, Saginaw, Michigan 48607. Pastor Rodrick A. Smith officiate. Interment will take place in Forest Lawn Cemetery, 3210 South Washington Avenue, Saginaw, MI 48601. Friends may call at Evans & Browne's Funeral Home, 441 North Jefferson Avenue, Saginaw, Michigan 48607, from 2:00-6:00 p.m. on Wednesday. Zeta Phi Beta Sorority, Inc., Zeta Omega Zeta Chapter will conduct a service at 5:00 p.m.

Juanita Mae Witherspoon was born on July 18, 1944 in Sylacauga, Alabama to the late James and Mable New. Juanita was the youngest of four children. She passed away on May 24, 2021 at the age of 76 years. Juanita Witherspoon was a resident... View Obituary & Service Information

The family of Mrs. Juanita Mae Witherspoon created this Life Tributes page to make it easy to share your memories.

Send flowers to the Witherspoon family.