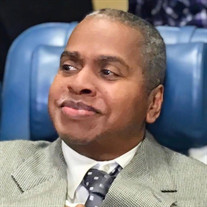 Mr. Kerry R. Mitchell departed this life on Tuesday, March 15, 2022 after a lengthy illness with Multiple Sclerosis. He passed away at Medilodge of Frankenmuth Long Term Care Facility at the age of 68 years. He was born in Saginaw, Michigan... View Obituary & Service Information

The family of Mr. Kerry R. Mitchell, Sr. created this Life Tributes page to make it easy to share your memories.