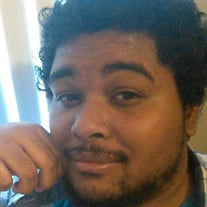 On September 3, 2020, God saw fit to call his child into glory. As he went to sleep, he took on his wings, and Kyle went home to be with the Lord. Kyle Nicholas Brault was born on May 14, 1993 to Sophia Patillo and Martin Brault. He graduated from Education and Training Communication and furthered his college career at the University of Arizona-Phoenix. Kyle enjoyed being with family and friends, playing the drums, playing video games, and cooking. Kyle will be remembered as a kind, considerate, caring, and giving person. He accepted Christ as his Savior at the age of 27 and intentionally lived the rest of his life loving God. Kyle leaves to cherish his memory his parents, Sophia (Marcelino) Olivarez and Martin Brault. His siblings, Ashley (Zackery) Sanders, Martin (Korena) Brault, Kayla Brault, Matthew Brault, Alexandria Green, Jackalin Taylor, Josalin Taylor, Danielle Griffin, Deja Griffin, Taylor Griffin, Mackenzie Griffin, and Trerasha Johnson. He has a host of nieces and nephews, cousins, aunts, and uncles. His close friends the Wallace family, Bruce, Joshua, Jimmy, Elaine, Jacob and Marie. Kyle was preceded in death by his sister, Peyton Griffin; grandparents, Elsie Patillo, Carol Brault and Dean Brault; his uncle, Dean Brault Jr. and his aunt, Sarah Payton. Then Jesus told them this parable: “Suppose one of you has a hundred sheep and loses one of them. Doesn’t he leave the ninety-nine in the open country and go after the lost sheep until he finds it? And when he finds it, he joyfully puts it on his shoulders and goes home. Then he calls his friends and neighbors together and says, ‘Rejoice with me; I have found my lost sheep.’ I tell you that in the same way there will be more rejoicing in heaven over one sinner who repents than over ninety-nine righteous persons who do not need to repent. Luke 15:3-7 (NIV) Visitation will take place from 2:00 until 6:00 p.m. Thursday, September 10, 2020, at Evans & Browne's Funeral Home, 441 N. Jefferson Ave., Saginaw, MI 48607. A private funeral will be held. Dr. Byron C. Hayes, Pastor and Min. Davey Brinkley will officiate with interment in Forest Lawn Cemetery, 3210 S. Washington Avenue, Saginaw, MI 48601.

On September 3, 2020, God saw fit to call his child into glory. As he went to sleep, he took on his wings, and Kyle went home to be with the Lord. Kyle Nicholas Brault was born on May 14, 1993 to Sophia Patillo and Martin Brault. He graduated... View Obituary & Service Information

The family of Mr. Kyle Nicholas Brault created this Life Tributes page to make it easy to share your memories.

Send flowers to the Brault family.