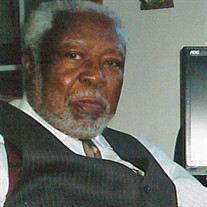 Mr. Lanary Ralph Culpepper was born on June 6, 1933 in Saginaw, MI, the son of Walter and Ruby Culpepper. Ralph made his transition on Monday September 20, 2021, and he was a residence of Buena Vista Twp. in Saginaw, MI. He was... View Obituary & Service Information

The family of Deacon Lanary "Ralph" Culpepper created this Life Tributes page to make it easy to share your memories.

Send flowers to the Culpepper family.