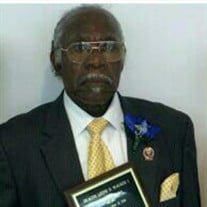 Sergeant Leffie D. Walker I, was born April 30, 1930 in Arcadia, LA to the late Johnny Lee Walker and Jennie Lee Hill Cambell. They preceded him in death. Leffie was the eldest of five children, he passed away on Thursday, November 26, 2020 at the age of 90 years. Leffie loved the Lord, he accepted Christ as a young boy and was baptized at the Liberty Hill Baptist Church in Arcadia in the early 1940s. Leffie joined the U.S. Army in August of 1950. He fought in the Korean Conflict, received the Distinguished Korean Service Medal, with Bronze Service Stars. In December of 1950, he was given Sergeant E7 First Class. He received the Unit Citation Award and the United Nations Service Medal. Leffie loved the Army. Upon his discharge in 1953, Leffie joined the Army Reserves, where he recruited many young men and women. After 20 years of service, he continued to help Veterans to get their retirement and disability. His motto was, “He could never retire”. Leffie was an advent sports fan. During his youth, he became involved in intermural Boxing which led him to become the Middle Weight Golden Gloves Champion of Michigan in 1958; all while working at Grey Iron Foundry of General Motors, Corporation. After his discharge from the Army, he and his brother, J.H. Walker, relocated to Bay City, Michigan. The brothers were hired in September of 1953 at Grey Iron Metal Casting Plant. He was a member of UAW Local 668. Leffie also worked at G.M. Defiance, Ohio Plant and retired after 41 years of service with the corporation. During his time at the Grey Iron Plant, he and several coworkers formed a group and purchased a restaurant called the “Big Ten”. Late in the 1950’s and early 1960s, Leffie got involved in the music industry. He enjoyed managing a singing group, and he promoted dances featuring new recording artists such as, Major Lance and others. Leffie was truly a go-getter. In 1990, Leffie got another chance at love. He met and married Juanita Burden-Erby in 1991. They shared her three children from her previous marriage. Leffie was truly blessed to find Juanita. She was there in the good times and all during his illness. They were very involved in the church. Leffie was the Head Deacon at Rose Hill Baptist Church and sang in the choir. Juanita was the church nurse. Leffie belonged to The Saginaw Valley District Association and the Laymen Department, and worked on the Finance Committee in Wolverine Baptist Convention. On Wednesdays, he went and prayed for the sick at the hospitals and nursing homes in Saginaw and Flint. He donated bibles to his church, the “Rose Hill Missionary Baptist Church” where he was always giving and willing to do whatever was necessary. Leffie is survived by his wife of 29 years, Juanita B. Walker; one sister, Rosa Lee Keller; one uncle, Henry Island; one sister-in-law, Bernice Walker, three daughters, Geraldine Walker, YoVonne (James) Starks and Yvette (Michael) Smith; six sons, Leffie D. Walker, II, Jeffrey (Debra Ann) Walker, Torray T. (Allison) Walker, Arthur "Wayne" Arnold, James Erby, Jr., and Yvain Erby; Leffie has twenty grandchildren; eleven great-grandchildren; a host of nieces, nephews, cousins and friends. Sergeant Walker was also preceded in death two brothers, J. H. Walker and J.B. Walker, his sister, Elizabeth Davis and one son, Major Z. Walker. The family of Leffie D. Walker would like to express their gratitude and thank you to everyone that has shown all their love and support. Villa of West Branch, McLaren Bay Regional Hospital, and Evans & Browne’s Funeral Home. We pray that the Lord bless you all for your acts of kindness. Visitation will take place on Tuesday, December 8, 2020 from 2:00 until 6:00 p.m. at Evans & Browne's Funeral Home, 441 North Jefferson Avenue, Saginaw, Michigan 48607. A private service will be held with Pastor Charles A. Dallas officiating. Interment will take place in Great Lakes National Cemetery, 4200 Belford, Holly, Michigan 48442.

Sergeant Leffie D. Walker I, was born April 30, 1930 in Arcadia, LA to the late Johnny Lee Walker and Jennie Lee Hill Cambell. They preceded him in death. Leffie was the eldest of five children, he passed away on Thursday, November 26, 2020... View Obituary & Service Information

The family of Sergeant Leffie D. Walker I created this Life Tributes page to make it easy to share your memories.

Send flowers to the Walker family.