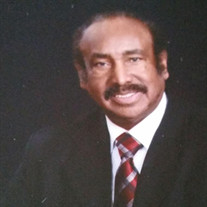 Mr. Leonard Nathaniel Williams, Sr. was the youngest born to the late Charlie and Charlie Bell Laffitte Williams in Gosport, Alabama on August 1, 1938. He made his transition from this life to eternal life on Monday night December 7, 2020 at Ascension St. Mary’s Hospital as the Lord saw fit to call him home. He attended Mackey Branch Junior High School in Gosport, AL and then graduated from Wilson Hall High School in Grove Hill, AL in 1957. He earned his Bachelor of Science degree from Alabama State University in 1964 and his Master’s degree in Secondary Education in 1973 from Central Michigan University. Leonard was united in Holy Matrimony to Narcissus Montgomery on August 15, 1970 in Nashville, Tennessee. He served as a board member of the Buena Vista School Board for several years. Many served in many capacities such as vice-president, secretary, treasure and chairman of the schools and facilities. He became a member of Alpha Phi Alpha Fraternity, Inc. at Alabama State University in 1963. He was one of the founders of Iota Chi Lambda Chapter of Saginaw, MI, the chapter was founded in 1971 by seven brothers which included brother Leonard Williams, Sr. He has been a member for 57 years devoting his time and effort for the cause of Alpha Phi Alpha Fraternity, Inc. In the Iota Chi Lambda Chapter, he served as the chaplain, treasure and vice-president. He was the recipient of the Iota Chi Lambda Chapter Service Award which highlights members who had gone above and beyond in their work for the community. He was always opening his arms to those less fortunate and extending his hands to help those in need. In the community, he was affiliated with the Saginaw County Association of Michigan Retired School Personnel and an active member of the Buena Vista Lions Club where he served in numerous roles. As a member of the Lions Club, he was very dedicated to serving the needs of the Saginaw community. He also was an active member of the NAACP, Alabama Reunion Club, and worked at the Saginaw Farmer’s Market. Leonard accepted Jesus Christ as his Savior at an early age and was a member of Bethel A.M.E. Church for over 50 years. He was a member of the Gospel and Chancel Choir. In addition, he worked for the Bethel A.M.E. Federal Credit Union/Frankenmuth Credit Union for over 40 years. Leonard Williams, Sr. taught in the Saginaw Public Schools for over 40 years. He taught at Webber Junior High School and then Arthur Hill High School in 1993 until retirement. Most of, all he was a role model and father figure to many in his community known as “Pops”. He enjoyed cooking and was well known for his famous “Smoked Turkeys”. He was an avid collector of items and loved to dance. His love for music entailed many genres of music. If anyone ever needed help with anything, such as rides, food, yard work, deals, or just to be a listening ear, he was there at the drop of a hat. Mr. Leonard Williams leaves to cherish his memories his devoted wife, Narcissus Williams of Saginaw, MI; sons, Leonard (Kate) Williams of Sydney, Australia, Shannon Williams of Atlanta, GA; daughter, Lanaya (Deon) Willis of Ypsilanti, MI; grandkids, Julian, Deon, Jr., Bralen and Brandon Willis of Ypsilanti, MI, Payten Williams and Autumn Johnson of Saginaw, MI, Isla and Jasper Williams, Sydney, Australia and a bonus grandson, Carson Johnson of Saginaw, MI; two loving sisters, Lillie Cade Mitchell and Fannie Portis, both of Mobile, AL; nieces, Lillian Steward of Los Angeles, CA and Wanda (Travis) Williams of Prichard, AL; nephews, Robert J. (Yvonne) Williams and Arthur (Angela) Williams, all of Mobile, AL, Willie Cade, Jr. , Pritchard, AL, Earnest (Gloria) Williams, Lancaster, CA and Javlin D. Williams, Gosport, AL; devoted cousins, Ben and Jake Laffitte, Mobile, AL; god-daughter, Dr. Kimberly Spells Wallace of Northville, MI; devoted friends, Tommie Linzsey, Mr. John Howard and Julius Boarden, all of Saginaw, MI and many other relatives and friends. He was preceded in death by his grandparents, parents, his sister, Etta Mitchell; brother, Robert James “RJ” Williams and two nieces, Evelyn and Patricia Portis. Visitation will take place on Monday, December 21, 2020 from 2:00 until 6:00 p.m. at Evans & Browne's Funeral Home, 441 North Jefferson Avenue, Saginaw, Michigan 48607. A private service will be held. Pastor Dennis Laffoon will officiate. Interment will take place in Mackey Branch Baptist Church Cemetery in Gosport, Alabama.

Mr. Leonard Nathaniel Williams, Sr. was the youngest born to the late Charlie and Charlie Bell Laffitte Williams in Gosport, Alabama on August 1, 1938. He made his transition from this life to eternal life on Monday night December 7, 2020 at... View Obituary & Service Information

The family of Mr. Leonard Nathaniel Williams created this Life Tributes page to make it easy to share your memories.

Mr. Leonard Nathaniel Williams, Sr. was the youngest born to...