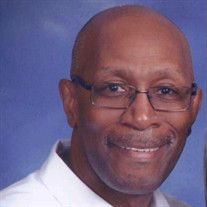 On March 10, 2022 at the age of 67, Leroy Johnson, a loving father, son, and devoted husband, went home to be with the Lord. He was born on November 15, 1954 in Saginaw, MI to Emma King and Leroy Carter Sr.   While attending Buena Vista High School, he was a member of the basketball team. He graduated from Buena Vista High School in 1972. During that time period, he met his high school sweetheart, Valerie Johnson, who would later become his wife on August 15, 1981. Following graduation, Leroy attended Staten Island Community College, where he studied business, science, and technology.  He began working as a sales clerk for Sears and Roebuck soon after returning from New York. Leroy later began working as a data entry clerk for AT&T in 1976. Aspired to learn new skills, Leroy received an offer to take business and technical courses. After taking these classes, he received several promotions. Later in 2011, he retired from AT&T with the title of Field Foreman.  Fishing with his father, collecting comic books, and listening to a wide variety of music were some of Leroy's favorite activities. His other interests included video games, photography, and working with technology. Family gatherings were one of his favorite events, and he was known as the pit master for his barbecues. Additionally, he enjoyed watching action movies featuring characters from his favorite comic books. Leroy was devoted to maintaining his lawn and various projects around the house. In addition to being very knowledgeable about many subjects, he was always willing to go the extra mile to help out his family and friends. His warm smile and heartwarming presence will be deeply missed by all of us.   Leroy’s memory will be cherished by his devoted wife of 40 years, Valerie Johnson; beloved son, Timothy L. Hart of Jacksonville, FL; grandchildren, Johnathan J. Bennett of Arlington, TX and Aiden J. Hart of Jacksonville, FL; his mother, Emma Hawkins; sister, Ineka Nelson and brothers, James Johnson and Derrick Mckinney, all of Saginaw, MI, Arlondo (Linda) Mckinney of Grand Rapids, MI and Timothy L. Carter of Alexandria, LA; great niece who he treated like a daughter, Brianna Watkins of Saginaw, MI; aunt, Janie (Gregory) DeMyers of Lansing, MI; uncle, Isaiah (Ella) Smith ofSaginaw, MI; sisters-in-law, Debra Beemon of Saginaw, MI and Sharon (Wilbert) Brown of Austin, TX; brothers-in-law, Bobby Beemon of Kennesaw, GA; Jeffery Beemon of Saginaw, MI and Michael Beemon of Kentucky; a host of nieces, nephews, cousins, other relatives and friends including special friends, Rasul Price and Marcia Porter. Leroy was preceded in death by his father, Leroy Carter Sr.; grandparents, Steve and Rosa Lee Johnson, and Red and Artisher Smith; mother-in-law, Mary Atwater Doster; aunts, Margaret King, Mildred Smith and Atrisher Smith; uncles, Walter Brown Jr., Tard Smith, and James Carter; along with his close friend David Taylor.  The family would like to express a special thanks to Hospice of Detroit, MI. Family hour 10:00AM Tuesday, March 22, 2022 at Evans & Browne's Funeral Home, 441 North Jefferson Avenue, Saginaw, Michigan 48607, with memorial service commencing at 11:00 AM, Pastor Dennis Laffoon will officiate.

On March 10, 2022 at the age of 67, Leroy Johnson, a loving father, son, and devoted husband, went home to be with the Lord. He was born on November 15, 1954 in Saginaw, MI to Emma King and Leroy Carter Sr.   While attending Buena Vista High... View Obituary & Service Information

The family of Mr. Leroy Johnson created this Life Tributes page to make it easy to share your memories.

Send flowers to the Johnson family.