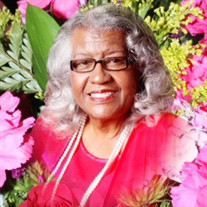 Lessie Mae (Batts) Lyons gained her heavenly promotion on Thursday, April 8, 2021 at the age of 86 years. She was born on May 13, 1934 to the late McElroy and Mary (Pollock) Batts in Philadelphia, Mississippi. The total of who Lessie was is a beautiful work of art. But, the most important and inspiring aspect of her life was her commitment to Christ and her unwavering walk of faith! She accepted Christ as her Lord and Savior and was baptized at 10 years of age at Seals Baptist Church in Philadelphia, MS and she has been running for the Lord ever since! After relocating to Saginaw, MI in 1955 with her husband and son, she united with Corinthian Missionary Baptist Church under Rev. Otis J. Steele. Lessie remained a faithful servant of Christ for 76 years and a loyal, dedicated member of Corinthian Missionary Baptist Church for 66 years until the time of her passing. During her many decades of steadfast service to Corinthian she served God and the church in countless capacities including President, musician, and choir director for various choirs; President of the Kitchen Committee; member and past officer of the Mission; Sunday School Teacher, member of the Transportation and Beautification committees and she was a staunch supporter of the Baptist Convention on a local, state and national level. Lessie also loved her community and neighborhood and she served as a faithful member of the Morley Enrichment Center, Inc. (MECI). She was love in action and always quick to forgive and reconcile. Those who knew her know that she was a fierce proponent for truth, honesty and doing things right and in order. Our mother was an extraordinary, selfless and virtuous woman with a quick wit, an unexpected sense of humor, a smile that lit up the universe and an ever-ready word of encouragement or correction! She was a tireless soldier for the Lord who chose love over fighting but, she was equally comfortable on the frontline of battle when it was for the Lord and righteousness. Throughout seasons of her life Lessie was an avid sportsman as a participant and observer and she was a championship bowler! She had a passion for encouraging and helping others, singing, cooking, traveling and playing the piano. Lessie retired from the Saginaw Transit System in 1994 and she was a proud alumnus of her beloved Alcorn University. Lessie is survived by one son and four daughters, including Virgil (Loretta) Lyons and Regina (Willie) Johnson of Saginaw MI, Kimberly Lyons-Butler of Alexandria, VA, Judy Moore of Woodbridge, VA and Diane Slaughter of Rock Island, IL; ten grand-children including, Vatrein Cordvae, Vermaries Simmons, Landon Lyons, Monique Lyons, Sonda Childress, Alexandra Moore, Kristin Moore, Marcella McQueen, Giovani Slaughter and Reginald Smith; ten great-grandchildren; three brothers including, Bennie (Bettye) Batts and William Batts, both of Saginaw, MI and Norman (Rita) Batts of Philadelphia, MS; two special sisters-in-love, Claudine Carter and Quintella Batts, both of Philadelphia, MS; special niece, Helen Thomas; a beloved godson, Marvin Jamil Plowden; a spiritual son and daughter, (Pastor) Dr. Roy L. and Beatrice Manning; two special musical sons, Trent Taylor and Keith Cistrunk; an adopted grandson, Columbus Clayton and a trusted and loved friend, Dr. Gregory Brown; as well, there are a host of nieces, nephews, extended family, church family and friends that she loved dearly. Lessie was preceded in death by her husband, Virgil Lyons; parents, McElroy and Mary Batts; two sisters, Ruby Drake and Maxine Moore; four brothers, James, Lee, Leonard and Billy Batts and one grandchild, Dionca Smith. Funeral service will take place at 11:00 A.M. on Friday, April 16, 2021 at Evans & Browne's Funeral Home, 441 North Jefferson Avenue, Saginaw, Michigan 48607. Pastor Roy Manning will officiate with interment in Eastlawn Memorial Gardens, 7475 Holland Rd., Saginaw, MI 48601. Visitation will take place Thursday, from 2:00 - 6:00 p.m. Evans & Browne's Funeral Home, 441 North Jefferson Avenue, Saginaw, Michigan 48607.

Lessie Mae (Batts) Lyons gained her heavenly promotion on Thursday, April 8, 2021 at the age of 86 years. She was born on May 13, 1934 to the late McElroy and Mary (Pollock) Batts in Philadelphia, Mississippi. The total of who Lessie was is... View Obituary & Service Information

The family of Mrs. Lessie Mae Lyons created this Life Tributes page to make it easy to share your memories.

Send flowers to the Lyons family.