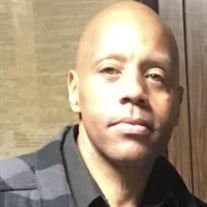 Mr. Lonnie Donald passed away on February 2, 2022 at his home at the age of 55 years. Lonnie, known as &#8220;The Wiggler&#8221; was born in Saginaw, Michigan and attended Saginaw Public Schools. He enjoyed being around his family, playing... View Obituary & Service Information

The family of Mr. Lonnie Donald created this Life Tributes page to make it easy to share your memories.

Send flowers to the Donald family.