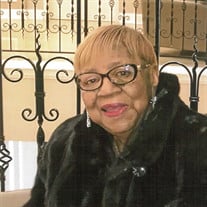 Mrs. Mable Marie Holloway passed away peacefully on Saturday, November 14, 2020 at her residence at the age of 88 years, surrounded by her loving daughters. Mabel was born October 27, 1932 in Paducah, Kentucky to Walter and Sarah (Jackson)... View Obituary & Service Information

The family of Mrs. Mabel Marie Holloway created this Life Tributes page to make it easy to share your memories.

Send flowers to the Holloway family.