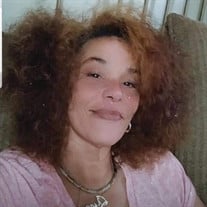 Madeline Annette Jones affectionately known as “Mz. Maddy” was born December 16, 1967 in Boston, Massachusetts to Ryland Jones and Edna Jones. Madeline. She moved to Saginaw, Michigan at a very early age, where she spent her most memorable years. She graduated high school in 1986, then went on to study at Delta College. She also attended M.J. Murphy Cosmetology School of Saginaw, and soon after received her licensure as a Cosmetologist. In later years she became a nurse. She was a member of Coleman Temple C.O.G.I.C. Her membership was inspired by her mentor Hurlette Coleman, where she sang in the choir. She first served as a nurse in the state of Michigan, then later moved to Mississippi to continue her service. She was known by her patients and coworkers as a caring, loving, and nurturing individual. Madeline was also well-known as a stylist in the City of Saginaw, and was the owner of Twist N Turns Beauty Salon. To know Madeline is to love her. She was beloved by her family, friends, and the community. She enjoyed traveling. Her vibrant personality touched the lives of many, she always highlighted the good in others. Her children and family hold dear memories of her strong faith in God. She didn't believe in worrying, instead she believed in handing the troubles of this world over to God. She lived a zestful life leaving behind many precious memories with family and friends. She leaves to cherish memories, six children, Ciaira C. (Lorenzo) Jones-Sparks and Marquavious M. Jones both of Fort Wayne, IN, Mysteriah M. Jones, Sherman L. Jones, Sonya C. Jones of Columbia, SC, and Craig L. Jones all of Greenville, MS; a bonus daughter, Stacie Garrett; 22 grandchildren; her mother, Edna C. Jones-Webb of Saginaw, MI; her father, Ryland (Queenie) Jones of Georgia; her brother, Starkey Sherman (Vanessa) Jones of Charlotte, NC, Ronnie (Fatima) Turner of Saginaw, MI; sisters, Sonya (George) Mushatt of Detroit, MI, Pamela Sue Turner and Arlinda Baldwin both of Saginaw, MI, and Cathleene Merrit of Boston, Massachusetts; special cousins, Demetrius Webb, Michelle Valentine, Andrea Valentine of Houston, Texas, and Velissa “Brownie” Batts of Saginaw, MI; a host of nieces, nephews, loving aunts and uncles, especially Margeret C. Carr of Saginaw, MI; cousins; and special friends Phylis Stevenson, Jacqueline Johnson, and Deir Love. Madeline's family would like to give special thanks to Glenn Jackson of Greenville, MS, her loving, kind, and supportive fiancé and father figure to her youngest son, Craig. He has made these last few years special and memorable. She was preceded in death by her Step-father, Daddy Louis Webb and special father figures, Clifford Turner and Larry Patilla that held a very special place in her heart; her grandson, Khari Jones; brothers Nathaniel Webb, Kelvin “Bo” Turner; sister Linda (Fred) McKether; grandfather, Douglas G. Schecnk and Starkey Sherman Jones; grandmothers, Madeline Goode-Schenck, Charlena Schenck- Bryant, and Gladys Jones; uncle, Ashley Jones; and nephew, D'Varyohn McKinney. Special thanks to family and friends for all the kind words and deeds, and to Evans & Browne’s Funeral Home for assisting in our time of bereavement. Funeral service will take place at 11:00 a.m. on Friday, February 18, 2022 at World Outreach Campus, 2405 Bay Road, Saginaw, Michigan 48602. Pastor Hurley J. Coleman, Jr., will officiate with interment in BV Cemetery, 612 Airport Road, Saginaw, MI 48601. Visitation will take place at the funeral home on Thursday, from 2:00 until 6:00 p.m.

Madeline Annette Jones affectionately known as &#8220;Mz. Maddy&#8221; was born December 16, 1967 in Boston, Massachusetts to Ryland Jones and Edna Jones. Madeline. She moved to Saginaw, Michigan at a very early age, where she spent her most... View Obituary & Service Information

The family of Ms. Madeline Annette Jones created this Life Tributes page to make it easy to share your memories.

Send flowers to the Jones family.