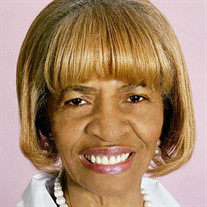 Maggie Laverne Patrick Gaddis, also known as “Pat” was born on December 28, 1942 in Memphis TN. She was the oldest child born to Mary Louise Fifer. Maggie passed away on Saturday June 13, 2020 at the age of 77 years old. Pat attended Melrose Elementary and later relocated Kosciusko, MS where she was cared for by her grandparents. She graduated from Greer High School in 1961. Inspired by her grandparents to further her education, she enrolled in Alcorn State University, majoring in Biology. There she met and married the love of her life James “Pete” Gaddis. After serving abroad in the United States Army, Pete and Pat settled in Saginaw, Michigan around 1967. Their love story has spanned nearly 60 years, both unwavering in their commitment to each other. Pat furthered her studies to help young children improve their reading skills by obtaining her Master’s degree in Early Childhood Development from Central Michigan University. She was a faithful teacher in the Saginaw Public Schools for 38 Years. One of the joys of her life was teaching children and helping them build the confidence to achieve their goals. She was an amazing teacher and served as an inspiration to all who knew her. Pat enjoyed her membership in Alpha Kappa Alpha Sorority, Inc. She was initiated into the Eta Upsilon Omega Chapter in 1963. She was a silver star, life member and has been an active member for 47 consecutive years. Pat has served in various capacities in the sorority, most notably she served as Ivylette youth group advisor, undergraduate advisor to chapters at Central Michigan University and Saginaw Valley State University. She has been honored as Senior Pearl of the year and VIP Soror of the year. Pat was extremely proud to serve the Saginaw community as a member of Alpha Kappa Alpha Sorority, Inc. Pat enjoyed serving as a member of Zion Missionary Baptist Church for 43 years as VBS teacher, member of the Chancel Choir, Skipworth Murphy Mission group and various other capacities. Her other community involvement includes Alcorn State University National Alumni association , KITABU book club, National Council of Negro Women and Saginaw Habitat for Humanity. Pat was known to be very loyal, generous and giving person. She loved to dance, travel, read and spend time with family and friends , including her lifelong best friend and sister Carol Shivers. Most who know them rarely saw one without the other. Pat Leaves to cherish many memories: three children Cora Jorene, Cristopher Pierre and Christy Nickerson (Richard III); eight randchildren, Leslie Joi, Symona Jade, Khalia Janay, Tyla Christiana , Autumn Journee, Richard James Nickerson IV, Joshua Caleb and Zoe Nicole; and one great-grandchild, Ivory Avanna; sister, Wanda Louise Patrick; brother, Gerald Patrick (Josie); a host of very special brothers-in-law and sisters-in-law, nieces and nephews whom she loved as her own; seven god-children whom she adored. Maggie Laverne Gaddis was preceded in death by her dearest husband, James “Pete” Gaddis and beautiful mother and father Mary Louise and Otha Patrick. Visitation will be from 2:00 until 6:00 p.m. on Friday, June 19, 2020 at Evans & Browne's Funeral Home, 441 N, Jefferson Ave., Saginaw, MI 48607. A private funeral service will be held. Pastor Rodrick A. Smith will officiate with interment in Great Lakes National Cemetery, G-4200 Belford Rd., Holly, MI 48442.

The family of Mrs. Maggie LaVerne Gaddis created this Life Tributes page to make it easy to share your memories.

Send flowers to the Gaddis` family.