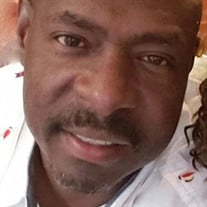 Marcus Levan Wright, 55 years of Saginaw, Michigan was reunited with our Lord and Savior on June 1, 2022. He was born the son of Richard and Mary Wright on May 27, 1967 in Carrollton, Alabama. Marcus met and fell in love with his soulmate of 31 years, Simone Jones and they married in 1995. Marcus received Jesus Christ as his Lord and Savior at an early age and became a member of St. Paul Missionary Baptist Church until 2002. He and his family later joined Faith Harvest Church where he was a faithful member until his death. He attended Buena Vista “BV” Public Schools and was a proud graduate of the Class of 1985. After serving in the U.S. Army for ten years, Marcus received an Honorable Discharge. He had a heart for children and worked several years as a youth counselor. Marcus was employed by SC Johnson for ten years and retired in 2016. Marcus enjoyed laughing, hanging with friends, spending time with his family, traveling, attending car shows and detailing his “Ole Skool”; Boy, did he enjoy washing his cars! Marcus was well liked by everyone and always had an encouraging word for those he encountered. Marcus truly loved his family and his heart was extremely big and he was always ready to help anyone in need. He enjoyed spending quiet time alone in his yard, and took pride in doing yard work. While Marcus was typically a very quiet and observant person, his presence was compelling. He was a strong man who truly enjoyed life. The Lord called, and Marcus answered. He fought a long and hard battle and would often state, “I’m a Warrior!” He went to his eternal home on June 1, 2022. Mr. Wright leaves to cherish his memory, his loving wife of 27 years, Simone (Jones) Wright; two daughters, Quintoria Ruth, Arlington, TX and Asia Jones, Houston, TX; one son, Marcus Wright II, Saginaw; grandson, Courtlin Knight, Jr.; his parents, Richard and Mary Wright, Saginaw; three sisters, Shameka Hall and Elandra Jones, both of Jacksonville, FL and Cassandra Wilkins, Crofton, MD; brother-in-law, Gilbert (Phyllis) Crittendon, Charlotte, NC; four sisters-in-law, Rosalyn Reese, Dallas, TX, Brenda (Henry) Hopson, Roxie (Wayne) Lampkins, Saginaw and Annette (Kenneth) Russell, Nolensville, TN; two godchildren, Corrion Sherley, Dallas, TX and Kaidence Livingston, Saginaw; a host of aunts, uncles, nieces and nephews, cousins, and many friends including a very special friend, Randall Carter, Saginaw. Upon his arrival to heaven’s gate, Marcus was greeted by many loved ones who preceded him in death. “And God shall wipe away all tears from their eyes; and there shall be no more death, neither sorrow, nor crying, neither shall there be any more pain: for the former things are passed away.” Revelation 24:4 KJV Funeral service will take place at 11:00 a.m. on Friday, June 10, 2022 at Faith Harvest Church, 1734 North Mason, Saginaw, Michigan 48608. Bishop Ronald E. Chipp will officiate. Interment will take place in Great Lakes National Cemetery, 4200 Belford Rd, Holly, MI 48442. Visitation will take place at the funeral home on Thursday from 2:00 until 6:00 p.m.

Marcus Levan Wright, 55 years of Saginaw, Michigan was reunited with our Lord and Savior on June 1, 2022. He was born the son of Richard and Mary Wright on May 27, 1967 in Carrollton, Alabama. Marcus met and fell in love with his soulmate of... View Obituary & Service Information

The family of Mr. Marcus Levan Wright created this Life Tributes page to make it easy to share your memories.

Send flowers to the Wright family.