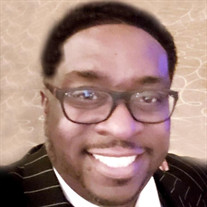 Minister Mark Lorenzo Pirtle was called to Heaven on July 25, 2020 in Saginaw, Michigan, shortly after turning 49 years old. Mark was born on July 16, 1971 in Brownsville , Tennessee to Charles and Ovallie (Taylor) Pirtle. He graduated from Buena Vista High School in 1989. Called to serve, he enlisted in the United States Navy. He served in the Dental Department, USS America CV-66 as a DT3 from 1989-1992. Mark retired and became a U.S. Navy Reserve, while attending Norfolk State University in Virginia. He later began working for Bank of America where he met his true love and best friend, Carnissa, and they were married in 2001. The last twenty years have been a journey of love and adventure for them, spreading joy wherever they lived, including Virginia, Delaware, and Michigan. Mark accepted Christ at an early age while an active member of Zion Missionary Baptist Church. He was forever a strong man of faith. In 2004, Mark became a licensed minister at Union Baptist Church in Wilmington, Delaware under the leadership of Dr. Pastor LaBarron McAdoo. Mark and Carnissa were longtime members at Union Baptist and Mark spearheaded many ministries. Mark was currently pursuing a dual degree at Andersonville Theological Seminary. He was a gentle and passionate witness of Christ, sharing testimonies to all that he encountered. Mark will be remembered for his jovial charisma, his dutiful faith in the Lord, and his compassionate spirit. A child at heart, he enjoyed comics and especially Superman, which was just one way he bonded with the many children he loved and mentored. He saw the truth in Superman’s saying: “There Is A Superhero In All Of Us, We Just Need The Courage To Put On The Cape.” Mark is survived by his beautiful wife, Carnissa Pirtle; devoted father, Charles Pirtle Sr., Saginaw, MI; loving brothers, Julian, Nashville, Tennessee and Charles, Merced, California; and caring mother-in-law, Vergie Cornick, Smithfield, Virginia; and a host of aunts, uncles, cousins and other family members. He is preceded in death by his paternal grandparents, Lovelace and Lela Pirtle and maternal grandparents, Ullyess and Lila Mae Taylor; and by his dear mother, Ovallie Pirtle (Taylor). We are heartened that Mark and his mother can be rejoined in heaven after twenty-one years. Mark recently shared words of hope that are especially fitting now. “I pray that a smile of joy from great memories will ease your tears of mourning. Be comforted in the Lord.” Visitation will take place from 2:00 until 6:00 p.m. on Friday, July 31, 2020 at Evans & Browne's Funeral Home, 441 N. Jefferson Ave., Saginaw, MI 48607. A private funeral service will be held. Pastor Rodrick A. Smith will officiate with interment in Great Lakes National Cemetery, G-4200 Belford Rd., Holly, MI 48442.

Minister Mark Lorenzo Pirtle was called to Heaven on July 25, 2020 in Saginaw, Michigan, shortly after turning 49 years old. Mark was born on July 16, 1971 in Brownsville , Tennessee to Charles and Ovallie (Taylor) Pirtle. He graduated from... View Obituary & Service Information

The family of Minister Mark Lorenzo Pirtle created this Life Tributes page to make it easy to share your memories.

Minister Mark Lorenzo Pirtle was called to Heaven on July 25,...

Send flowers to the Pirtle family.