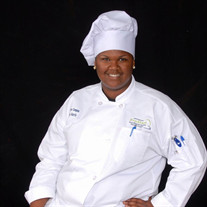 My beautiful, smart and intelligent daughter, “THE CHEF” spread her wings and flew away to be with her heavenly father on May 7, 2021 at 22 years of age. Ms. MarQuanae Andreana Harris was born on November 4, 1998 in Saginaw, Michigan to Quangi Glenn and Marcellius Harris. MarQuanae had a unique birthday that she shared with her big cousin Shanika Murray. She was well known in the kitchen to command her skills and be creative in whatever she did. Her work spoke for itself. Satisfaction was guaranteed. MarQuanae was known for not only her culinary skills, but also for her sweet smile and spirit. MarQuanae was very compassionate toward her family, especially her nieces and nephew. They were the “Apple of her eye”. She possessed a heart of generosity and she would give you the shirt off her back. To know MarQuanae was to love her. She never met a stranger. In MarQuanae’s early years, she had a strong desire to get to know Jesus Christ as her personal Savior. She was baptized by her late great-grandfather, Pastor E.W. Bothuel at Betlehem Baptist Church. She attended service, praising and worshipping the Lord every opportunity she had. MarQuanae was involved in the Children’s Ministry as well as being a prayer warrior. In fact, she knew if you were to knock at the door, Jesus would answer. She had a strong faith that was nurtured by her mother, grandmother and great-grandmother that kept her rooted and grounded in the Word of God. She was also richly blessed by an older sister who is a minister that was called at an early age to spread the gospel; she helped MarQuanae stay true to her calling. MarQuanae’s learning started with her Heavenrich family where her great accomplishments began to blossom. She was the first mascot for the cheerleading team who would definitely “shake what her mama gave her”. She later attended Francis Reh Academy where she acquired the skills to play basketball. She went on to attend Saginaw High School where she became one of the best drum liners ever. Also being the first female bass drum player who sparked other girls to want to be just like the girl with the blue hair, (we salute you, Qae Qae). She attended Saginaw Career Complex where she was noted as having the gift in the field of “Culinary Arts”, that would mold her into becoming one of the greatest culinary chefs to ever exist. This accomplishment led her to receive a scholarship to Sullivan Culinary Institution in Louisville, Kentucky where she attended completing her education at Saginaw High School C/O 2016. She was the “Jack of all trades”. MarQuanae known as “Qae Qae” or “Kookie” will be missed by all who loved and knew her. MarQuanae will be affectionately missed by her mother, Quangi Glenn; two sisters, Trynae (Anthony) Austin, Detroit, MI and Martavia Harris; grandparents, Andre Barkley, George and Glendora Harris; great-grandmother, Barbara Barkley; three uncles, Andre (Angelica) Gissendanner, Luconious Ross and Terrence Harris; one aunt, Yataiva Harris; three great-aunts, Ingrid Barkley, Cornelia Faye Presley and Deborah (Vaughn) Murray; four nieces, Aubrey, Aviree, Emerie and Artaisha; one nephew, Valente; godparents, Audra Taylor, John Bond, Dawn Ann Hughey and Gwedolen Bond; god-sisters, Shawnae Hughey, Alicia Williams, Auri-Oddney Clement and Sharmese Gibson; god-brothers, Alfred O’Neal and Robin Young III; a host of cousins and friends including special friends, Micheau, Eric, Jatimah, Ariana, Montavia, Darnisha and Joedel, MarQuanae loved all of her cousins dearly. MarQuanae was preceded in death by her father, Marcellius Harris; grandmother, Diane Gissendanner; great-grandfather, Sterling Wilson, Sr.; great-grandparents, Pastor E. W. and Doris Bothuel, and great-grandmother, Idella ”Tutt” Irvin; great-great-aunt, Dorothy Martin. Visitation will take place from 2:00-6:00 p.m., Family hour 4:00-6:00 p.m. Wednesday, May 19, 2021, at Evans & Browne's Funeral Home, 441 North Jefferson Avenue, Saginaw, Michigan 48607. A private funeral service will be held. Bishop Larry Camel will officiate with interment in Buena Vista Cemetery, 612 South Airport Road, Saginaw, Michigan 48601.

My beautiful, smart and intelligent daughter, &#8220;THE CHEF&#8221; spread her wings and flew away to be with her heavenly father on May 7, 2021 at 22 years of age. Ms. MarQuanae Andreana Harris was born on November 4, 1998 in Saginaw, Michigan... View Obituary & Service Information

The family of Ms. Marquanae Andreana "Qae Qae" Harris created this Life Tributes page to make it easy to share your memories.

My beautiful, smart and intelligent daughter, “THE CHEF” spread...